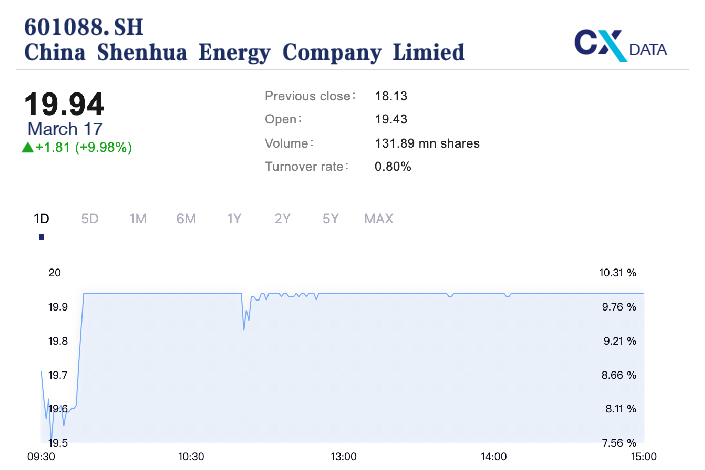 The state-owned energy giant, formed in 2017 through the merger of coal giant Shenhua and power major China Guodian Corp., posted 233.3 billion yuan ($35.7 billion) in revenue last year, down 3.56% year-on-year, according to a filling to the Shanghai Stock Exchange on Friday. Profits sagged 9.43% to 39.1 billion yuan.

The declines were partly fueled by falling coal prices, especially in the first part of the year, with the company’s average selling prices for the fossil fuel down 3.8% year-on-year to 410 yuan per ton, the report said. Coupled with a 0.2% dip in the volume of coal sold during the period, Shenhua’s coal business — the source for more than 80% of its revenue — declined 3.7% year-on-year to 190 billion yuan.

Coal prices in China went on a roller coaster ride last year, with a major trough at the start of the year as the Covid-19 pandemic brought economy activity in the first quarter to a near standstill. As prices sagged to 495 yuan per ton in April, the China Coal Transportation and Distribution Association stopped updating a major index it compiled.

But a colder-than-usual winter and lower coal imports in the second half of the year sent the price soaring to nearly 700 yuan per ton, again prompting all three domestic coal index compilers to suspend updates in December due to the high level of volatility.

Beijing-based Shenhua sold almost all of its 446 million tons of coal products at home, with one-third of that imported, the report showed. In the fourth quarter, Shenhua also recorded an 841 million yuan write-down on its Watermark coal mine project in New South Wales, Australia.

Shenhua was also hit by weakness in its power division. It sold 11.4% less power last year than in 2019, resulting in a 6% year-on-year decline in power generating revenue. Power generation accounted for 15% of its total, according to the report.

The company’s logistics business also suffered, with revenue generated by railways and sea transport down by 2.5% and 5.6% from 2019’s level, respectively. That was somewhat offset by the company’s ports business, which rose 7.3% year-on-year, according to the report.

Shenhua plans to shrink capital spending on its coal business this year to 7.45 billion yuan from 8.15 billion yuan in 2020 as China seeks to achieve peak carbon emissions by 2030.

Since coal burning is one of the main producers of carbon-dioxide and considered the main greenhouse gas behind accelerated global warming, China is actively moving to substitute more renewable energy sources. In place of coal-fired power it aims to achieve carbon neutrality by 2060, which threatens to hurt companies like Shenhua over the longer term.

While coal spending is set to decline, the company will step up spending on businesses with better longer-term prospects. It will double spending on its power business to 14.8 billion yuan next year, and more than double that for its logistics business to 9.2 billion yuan, the report showed.