China to Pour $9 Trillion Into Green Energy by 2060, Bank Says 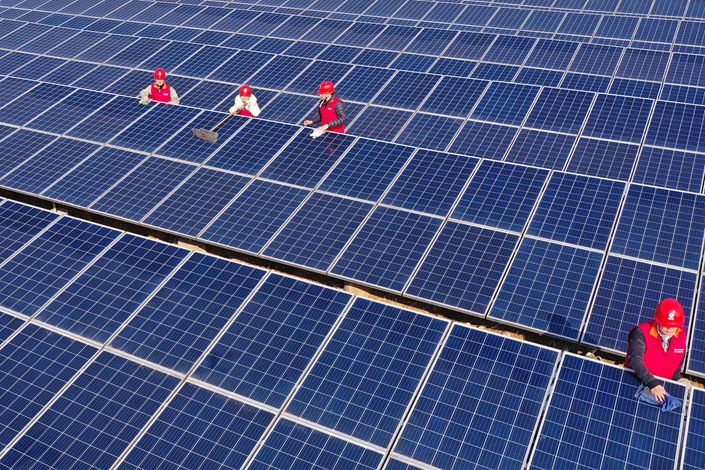 Even though the production costs of renewables remain high, CICC predicted the prices could be equivalent to that of coal by 2028, and then fall below that of fossil fuels by 2030. Photo: VCG

Investment in China’s green energy sector could amount to 60 trillion yuan ($9.17 trillion) as the world’s biggest carbon emitter looks to achieve its target of carbon neutrality in the next 40 years, one of the nation’s leading investment banks predicted.

One-third of the forecast amount, or 20 trillion yuan, may go to the solar sector due to its flexible development formats and plentiful sunshine, Liu Jun, chief new-energy analyst at China International Capital Corp. Ltd. (CICC), said in a report released Thursday.

Wind power and nuclear power could receive investment amounting to 14 trillion yuan and 5 trillion yuan, respectively, by 2060, while 11 trillion yuan could be poured into the power grid network to cope with the rising proportion of new energy in China’s power mix, according to the CICC report. A further 7 trillion yuan will be invested in power storage facilities, and 3 trillion yuan in hydrogen power, the report said.

Beijing has pledged to peak emissions by 2030 and make the country, which accounts for 28% of the world’s total emissions, carbon neutral by 2060. As the energy industry emits almost 90% of China’s carbon dioxide due to its heavy use of fossil fuel, the carbon neutrality target will require a transformation of the sector, the report said.

China’s Politburo called for building a “new power system dominated by new energy sources” at a high-level conference hosted by President Xi Jinping on March 15. The increasing penetration of renewables will be accompanied by a reduction of coal-fired power capacity, which currently produces the bulk of the nation’s electricity, as well as the growth of hydro, nuclear and battery storage to maintain the capacity adequacy and reliability of power supply, said IHS Markit in a December report.

The combination of solar power and electricity storage facilities will be the most important factors in facilitating carbon neutrality in the electricity sector, said Liu. CICC predicted in the report that domestic solar power capacity could spike 40-fold to 9,500 gigawatts (GW) by 2060. China’s wind and solar capacity stood at 530 GW at the end of 2020, according to the National Energy Administration, which doesn’t provide a breakdown for these two types of clean energy.

With development of clean energy sources set to go into overdrive in the coming years, renewables including solar, wind and hydro power could account for 70% of the total energy mix by 2060, the CICC report said. China in February released a draft plan aiming to ramp up the national share of renewables to 40% by 2030, when the country’s carbon emissions should peak.

The National Energy Administration said clean energy accounted for 24.3% of the overall energy consumed in 2020. However, fossil fuel would still make up 22% of the energy mix by 2060, equivalent to the use of 1.34 billion tons of coal, said the CICC report, adding that emissions from that kind of energy source needs to be captured in order to meet the carbon neutrality goal, and such technology would be used in sectors such as steel, cement and aluminum.

Even though the production costs of renewables remain high, CICC predicted the prices could be equivalent to that of coal by 2028, and then fall below that of fossil fuels by 2030.