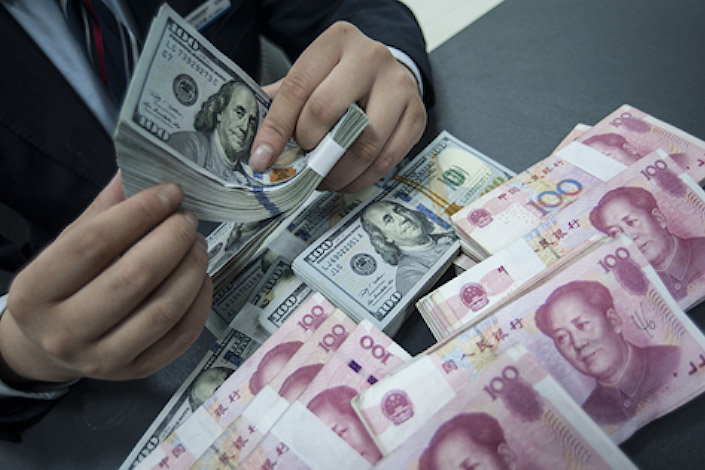 Overall, China had a balance of payments surplus of $168.1 billion in 2020, comprising a current account surplus of $274 billion, and a combined capital and financial account deficit of $105.8 billion, the latest data show.

China last year reported the first annual deficit on the financial account in its balance of payments in four years as regulators allowed more money to flow out of the country to ease appreciation pressure on the yuan stemming from rising foreign investment in the country’s capital markets.

The 2020 deficit, excluding reserve assets held by the central bank, amounted to $77.8 billion, although that’s down from an initial estimate of $175.9 billion given in February, according to revised figures for the balance of payments released by the State Administration of Foreign Exchange (SAFE) on Friday. It’s the first shortfall since 2016 when the country had a financial account deficit for the year, excluding reserve assets, of $416.1 billion. The financial account includes domestic ownership of foreign assets –– such as deposits, loans, securities, commodities and direct investment –– and foreign ownership of domestic assets.

“The deficit on the financial account excluding reserve assets shows that the accumulation of overseas assets by China’s private sector is continuing,” the administration said in a report (link in Chinese) accompanying the data. “First, domestic residents have increased their investment in overseas securities, which shows that demand to diversify assets (in investment portfolios) is strong. Second, outbound direct investment has been rational and orderly. Third, banks have increased their deposits and loans overseas, as the current account surplus has provided relatively abundant foreign currency liquidity.”

“Amid the continued appreciation of the yuan since June 2020, China’s foreign exchange policies have focused on increasing the flexibility of the exchange rate, expanding capital outflows and controlling capital inflows,” Guan Tao, chief global economist at BOC International (China) Co. Ltd. (601696.SH), wrote in a Feb. 23 report (link in Chinese) on the preliminary balance of payments data. He said he expected this foreign-exchange policy mix to continue as the “orderly expansion of capital outflows is an important policy tool to cope with the appreciation pressure on the yuan.”

In Depth:What’s Next for the Yuan After Crushing the Dollar for Six Months

Growing confidence in China’s recovery from the Covid-19 pandemic as other major economies continued to suffer, and higher yields on Chinese government bonds compared with U.S. Treasuries also contributed to an increase in inflows of foreign capital last year.

Outstanding overseas holdings of bonds traded in the onshore interbank market rose to 3.25 trillion yuan ($495 billion) at the end of December, a net increase of 1.1 trillion yuan from a year earlier, data from China Central Depository and Clearing Co. Ltd. and the Shanghai Clearing House show.

In an interview with Caixin, Guan said that foreign exchange in the onshore market was abundant in 2020, allowing banks to absorb domestic deposits in foreign currency and then deposit or lend them abroad.

In 2020, net outflows in other investment amounted to $314.2 billion, the highest since a deficit of $349.9 billion in 2016. This mainly comprised greater net outflow of deposits of $130.4 billion, 28% higher than in 2019, and a net jump in cross-border loans of $128.2 billion which reversed a net decline of $26 billion in 2019, as banks increased their overseas lending and companies added to their overseas deposits amid ample liquidity, according to the SAFE report.

For portfolio investment, cross-border funds flowed actively into and out of the Chinese mainland in 2020, SAFE wrote in its report. Last year, domestic investors bought a net $167.3 billion of overseas stocks and other types of securities, while their overseas counterparts purchased a net $254.7 billion in the Chinese securities markets, both hitting a record high since the data series on international balance of payments began in 1982.

The significant increase in inflows was due to “overseas investors’ bullish outlook on China’s medium- and long-term economic development, China’s attractive bond yields under its prudent monetary policy, and the country’s high-level opening-up of its financial markets which has created a favorable environment for investors to adjust their cross-border portfolios,” SAFE said in its report.