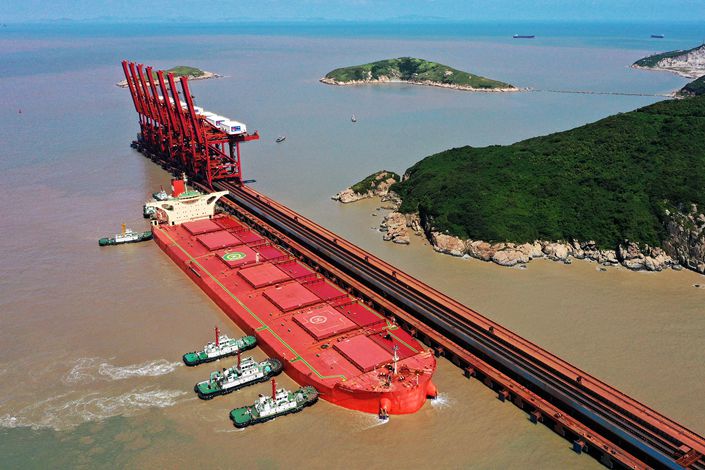 (Nikkei Asia) — There was a time when Japan, like China today, was the rising power in the East that kept military planners in the West awake at night.

“It is very certain that no other nation at the present time is spending so large a part of its revenue on naval preparations,” military author Hector Bywater wrote in the 1921 book “Sea-Power in the Pacific — A Study of the American-Japanese Naval Problem.”

But Japan had a critical weakness: a lack of steel.

“Since the close of the Great War, shipbuilding in Japan has been seriously hampered by the difficulty of obtaining steel,” Bywater observed in his book, which accurately predicted a naval conflict between Imperial Japan and the U.S. two decades later.

Japan had imported large quantities of American steel under a special agreement between the two governments prior to 1917, when the U.S. imposed a steel embargo that stemmed the flow to the Asian country.

“So serious has the shortage become of late that the output of tonnage in Japan during 1920 was 25% short of the forecast of 800,000 tons which had been made in January of that year,” Bywater wrote. “This scarcity of steel reacted on the naval program, delaying the launch and completion of ships.”

Chinese state planners looking to learn from history would quickly notice that the glaring vulnerability for Beijing today is its dependence on iron ore from Australia. While Beijing has tried to squeeze and punish Canberra for proposing an international investigation into the roots of Covid-19, it has been unable to wrestle itself away from Australian iron ore, which accounts for over 60% of China’s imports.

As Australia deepens its connection to the Quad grouping with the U.S., Japan and India, forming a de facto anti-China tag team in the Indo-Pacific, Beijing has found it increasingly uncomfortable to depend so much on Canberra for iron ore — the basic material behind its own military buildup.

But that dependence may very well change by 2025, says Peter O’Connor, senior analyst of metals and mining at Australian investment firm Shaw and Partners.

“They are very serious” about diversifying supply and flattening the cost curve of iron ore, O’Connor told Nikkei Asia.

The top focus for China’s diversification push is Guinea, an impoverished but mineral rich country in West Africa, O’Connor said. A 110 kilometer range of hills called Simandou is said to hold the world’s largest reserve of untapped high-quality iron ore.

Commodity watchers have known of Guinea’s potential for many years, but the lack of infrastructure has hamstrung such development efforts. A roughly 650 kilometer railroad would need to be built from scratch, as well as a modern port from which the iron ore would be shipped.

Cost calculations have always discouraged potential entrants, such as Rio Tinto. But Beijing has more incentive to carry out the project than mere return on investment calculations, as China needs to avoid the fate of Japan in the early 20th century.

“Infrastructure is a function of time, money, the willingness to invest and, more importantly, the capability,” O’Connor said.

China is building railroads around the globe through its Belt and Road Initiative and has no shortage of experience.

But what about the funding?

“For every $1 the Chinese can lower the long-term iron ore price ... that’s $1 per ton times a billion, so a billion dollars of saving per year,” he said. “It’s not just about diversity, it’s about lowering the price. It’s not about the return on equity or return on capital of the actual investment, it’s more about the benefit of the longer-term structure of the price.”

The long-term trajectory envisions the price of iron ore dropping to around $60 per ton from around $160 currently, according to market views.

The project to develop Simandou has been split into four blocks, and China holds either a direct or indirect stake in every one of them. The area holds an estimated 2.4 billion tons of ore graded at over 65.5%.

“Extraction of Simandou’s iron ore reserves would transform the global market and catapult Guinea into an iron ore export powerhouse alongside Australia and Brazil,” Lauren Johnston, a research associate at the SOAS China Institute of the University of London, told Nikkei.

China would find such waters easier to navigate than having to do business with Quad member Australia.

Guinea is this year’s chair of the “Group of 77 plus China” at the United Nations, a grouping of 134 developing countries that form a large voting bloc China can depend on. Guinea has actively made statements on behalf of the group since assuming the chairmanship in January.

Johnston predicted that China would be pleased if progress on Simandou were achieved ahead of the Forum on China-Africa Cooperation to be held in neighboring Senegal this year, the first time the Beijing-led gathering — held every three years — will be hosted by a West African country.

As if to reflect Beijing’s determination to see this project through, China was quick to congratulate Guinean President Alpha Conde on his reelection in October, despite accusations from the opposition of fraud. The election came after Conde altered the constitution, letting him run for a third term.

On March 4, the first batch of China-donated Covid-19 inoculations arrived in Conakry, Guinea’s capital, making the nation one of the first to receive vaccine assistance from China. Foreign Minister Ibrahima Khalil Kaba was at the airport to receive the gift, with Chinese Ambassador Huang Wei by his side.

“I believe that with the support of China, Guinea will surely overcome the epidemic,” Kaba said, according to the Xinhua News Agency.

The website of the Chinese Embassy in Conakry shows that Huang is a regular visitor to Kaba’s office.

“It’s not a coincidence,” O’Connor said. China is “preparing the pathway” to develop Simandou, with an expeditious 2025 timetable, he said. “That would seem stretched if you’re talking about a Western producer in Australia or Brazil, but it’s entirely plausible that China could be producing in that time frame.”