In Depth: China’s Carbon-Reduction Plans Turn Up the Heat on Steel Capital 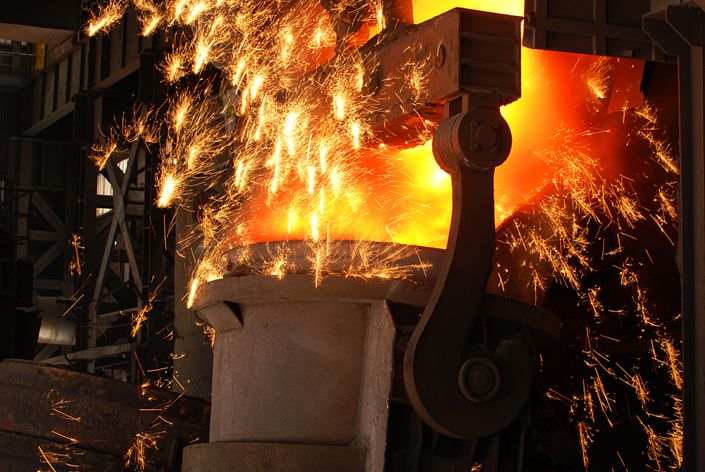 Two days after the curtain fell on this year’s annual meetings of China’s legislature and its top political advisory body, the country’s top environmental official traveled through a blanket of smog that marred much of the event to the city of Tangshan about 150 kilometers away. Huang Runqiu, head of China’s Ministry of Ecology and Environment, was a man on a mission, namely, to inspect the situation in a city on Beijing’s doorstep thought to be a major culprit behind the smog wave.

Tangshan’s massive steel-making complex accounts for 13.5% of China’s total, and is the largest contributor to the city’s heavy emissions. Huang quickly discovered that four local mills had failed to heed orders to curb production to help clear the air during the Beijing political gathering when much of the world’s eyes are on China. Instead, the scofflaw producers had continued engaging in full-throttle production and simply faked records to show they were complying with orders.

The resulting action was swift. On March 19, the city government issued an edict ordering that cuts designed to improve air quality on smoggy days and during the usual fall and winter smog seasons be extended to the entire year through Dec. 31. That meant that with a few exceptions, most of the city’s roughly two dozen steel mills were ordered to cut as much as 30% to 50% of their usual production.

In addition, domestic media reported that 12 people tied to the four scofflaw mills were detained on suspicion of crimes related to environmental pollution. Since then, environmental protection and public security officials have been stationed around the city’s various steel mills to make sure the rules are enforced this time.

With China easily the world’s largest steel producer, accounting for more than half its total, Tangshan could well be considered the global capital for the important industrial material. Such a moniker is both a badge of honor but is increasingly a symbol of shame.

On the one hand it reflects the city’s contribution to China’s huge economic transformation over the last 40 years. But more recently it has also become a symbol of the nation’s runaway carbon emissions, the product of heavy coal burning used to power energy-hungry steel furnaces. Those emissions contribute not only to dirty air, but also to greenhouse gases behind accelerating global warming.

Accordingly, the recent Tangshan cuts could well become a template for how China will conduct a painful but necessary campaign to rein in its steel industry as it tackles the double task of cleaning up the country’s air while also trying to keep its pledge of going carbon neutral by 2060. Such a task will require a delicate balancing act by cutting back capacity nationwide while making sure local economies don’t suffer too much in the process.

“If the shift is too quick, companies will suffer,” a person close to the local Tangshan steel industry told Caixin, discussing the sudden limits imposed on the sector.

“Local economies will come under a lot of pressure,” a Tangshan official at the city’s branch of China’s economic planner told Caixin. He added that without a broader national policy requiring similar cuts in other areas, Tangshan’s sacrifices will only result in players from other parts of China rushing in to scoop up market share lost by the city’s producers.

Tangshan is currently the world’s largest steel-making city, having produced 144 million tons last year, up 5.2% from 2019. That total alone was more than the 99.6 million tons of steel produced last year by India, the second largest manufacturing country after China.

The latest reductions included all major links in the production process for the first time, prompting observers to say the cuts could equate to 20% or more of last year’s production, equaling 27 million to 30 million tons for the year. Some of that is being achieved through administrative moves such as requiring more closures for maintenance. Data from industry website custeel.com showed that such idled capacity was about 21.6% higher as of March 19 compared with just a week earlier.

While pollution was the main driver behind the latest order, the extension through year-end is being equally motivated by China’s pledges to reduce carbon emissions in the future, observers said. In that regard, the city can be seen as a sort of test bed for how Beijing plans to meet those commitments by reining in the country’s massive steel-making complex.

The nation’s Ministry of Industry and Information Technology (MIIT), which oversees the sector, said the issue needs to be tackled not only by controlling capacity but also through the control of actual output to guarantee that crude steel production will start coming down this year. Many industry observers pointed out that achieving such a reversal will most likely need to be done through government-led environmental protection administrative measures.

Near the end of last year, MIIT chief Xiao Yaqing said a consensus had already been reached among the government, policymakers and industry on how to curtail output. Rough figures for total reduction targets have been ironed out and basic work done for a bigger plan, which is now just awaiting finalization and publication, sources told Caixin.

Many observers believe the national policy will be rolled out first in Northern China, which is home to a large concentration of producers and has some of the nation’s dirtiest air. Such a cleanup will be particularly important as Beijing, which falls within the general region, gets set to host the Winter Olympics next year.

“Since the MIIT announced its steel-reduction targets at the beginning of the year, we’ve all been guessing how the policy will be rolled out. The reductions in Tangshan show a clear trend. But it’s not enough to only control Tangshan’s output, it should be the entire country,” said a person in the local steel industry.

Hints of the coming changes picked up in mid-January, when former Hebei environmental chief Gao Jianmin became Tangshan’s deputy party secretary and acting mayor. Following a meeting on March 19, he said the city must redouble its efforts to reach provincial-level targets given out in the previous month aiming for at least a 3% reduction in PM 2.5 levels and at least 71% of days classified as “good” air quality. or better. for the entire province by end of year.

In March, the city’s policy kicked into high gear, with at least five separate measures rolled out to tackle the emissions problem using administrative means. As those measures take effect, the city’s crude steel production is expected to start falling from March or April.

As Tangshan becomes a test center for China’s emissions reduction, it will have to deal with issues like balancing cuts with maintaining satisfactory economic growth. The cuts will raise steelmakers’ costs by boosting their fixed-asset depreciation for idle capacity, said a person at one factory. Many producers will also be left with too many workers, forcing them to either reduce wages or resort to temporary layoffs for some lower-skilled employees.

Roland Berger energy analyst Zhang Wei said China’s economic development has historically been focused solely on growth without major mechanisms for controlling and adjusting such growth. In the upcoming experiment, policy will need to consider the costs to society and incorporate good top-level design to move forward in a safe and predictable way, he added.