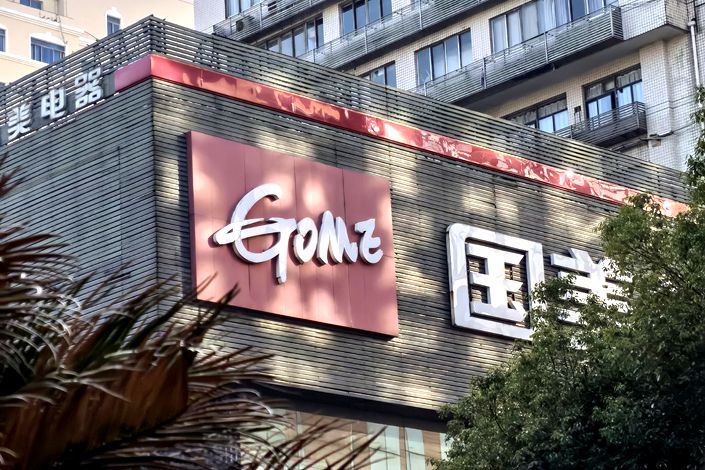 Despite the slump, Gome saw sales in the second half of 2020 jump 31% year-on-year after a 44.4% decline in the first half, when the country’s economy was ravaged by the pandemic.

The Covid-19 outbreak last year just added to existing headwinds for the appliances retailer, which has seen four consecutive years of falling revenues and losses. Over the past decade, Gome has been eclipsed by e-commerce rivals Suning.com Co. Ltd. and JD.com as the soaring popularity of online shopping has transformed the retail landscape. Last year, JD.com posted revenue of more than 740 billion yuan, more than 16 times that of Gome, and Suning earned 260 billion yuan.

Shrugging off its woes, Gome is forging ahead with expansion plans, saying it plans to increase its brick-and-mortar stores to 6,000 within the next 18 months, up from 3,421 as of the end-2020, in over 500 cities, including low-tier urban centers and rural locations across China.

In an effort to reverse its losses, Gome has started to retreat from e-commerce and focus on transforming its brick-and-mortar stores. It removed “electronics” from the company’s name in 2017 in the hope of expanding its presence in non-retail sectors, including real estate, finance and online consumer financing.

Over the past two years, Gome has made a series of attempts to change its image as a home appliance store, including opening comprehensive living-experience stores in first and second-tier cities. The strategy is to combine low-frequency purchases of household appliances with sales of products bought more frequently.

Offline appliance sales made up 98.78% of its entire revenue in the first six months last year, according to its interim report, while online sales accounted for just 1.22%. The company did not reveal the proportion of offline and online revenue in the full-year report.

Gome has relied on telecommunication products were the biggest source of revenue, making up 21.1% of its entire revenue last year, up from 18.5% in 2019.

The record loss came in the year when its founder, Huang Guangyu, also known as Wong Kwong Yu, was released from prison, after serving nearly 12 years for insider trading and corporate bribery. His June release boosted the company’s shares by nearly 18% that day, on hopes that the then 51-year-old legendary billionaire would return to lead the electronics retailer he built from scratch.