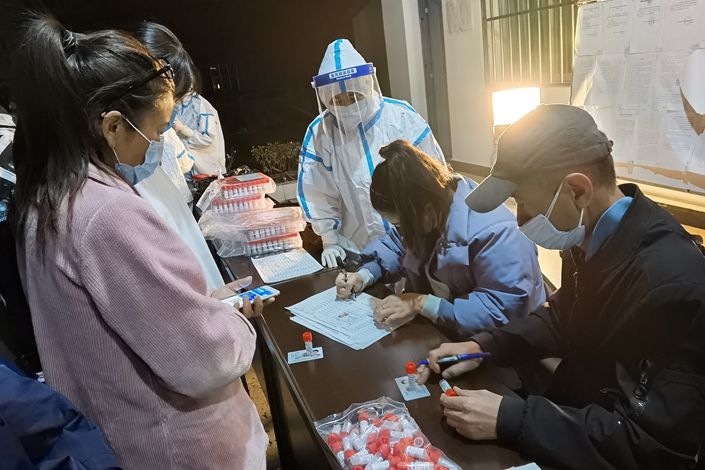 A southwest city on the border with Myanmar undergoing its second Covid-19 lockdown will become the staging ground for China's largest emergency vaccination drive since the start of the pandemic, one of the country’s top epidemiologists said.

Zhang Wenhong, the head of the infectious diseases department at Shanghai’s Huashan Hospital, wrote in a Caixin op-ed (link in Chinese) that the initiative “provides a new conception for responding to local outbreaks” of the coronavirus.

Dozens of coronavirus infections have been recorded in Ruili, a major border crossing with Myanmar, since the local government imposed a new lockdown on Wednesday, according to the health commission of Yunnan province, where the city of 300,000 people is located.

In an interview with state broadcaster CCTV on Thursday, Gong Yunzun, Ruili’s Communist Party secretary, said the city would on Friday launch a round-the-clock program to vaccinate all residents within five days in a bid to curb the spread of the virus.

The inoculations would be compulsory, Gong said, adding that “they touch on the normal operation of our city and the health of every resident.” China’s national vaccination campaign has so far encouraged working-age people to get the shots, but has not made it obligatory.

The new cases underscore the difficulty of curbing the spread of Covid-19 along the porous 2,000-kilometer boundary, where cross-border trade sustains much of the local economy.

Vaccine supplies, which have been patchy in other parts of the country, were “not a problem” in Ruili, Gong said, adding that a new batch of 159,000 vials was due to arrive Thursday evening. Most vaccines approved for public use in China require two doses to provide full immunity.

Health officials in Yunnan have recorded 46 Covid-19 infections since Monday, the vast majority of which are in Ruili. The outbreak is the Chinese mainland’s biggest since January.

Around half of the cases are Myanmar nationals, prompting officials to step up border controls and put out calls for Burmese interpreters.

On Wednesday, the Ruili government ordered residents to remain at home for seven days and announced a citywide coronavirus testing program. So far, more than 300,000 samples have been taken and over 100,000 tests have been completed, according to government disclosures.

In accordance with lockdown rules, all schools in Ruili have suspended classes, the local airport has stepped up quarantine and social distancing measures, and all businesses have been shuttered except supermarkets, pharmacies and farmers’ markets. Each household is permitted to send one person to buy daily necessities.

The lockdown appears to have caught many people in the city off-guard. One resident told Caixin she learned of the policy while traveling through a nearby market town on Monday afternoon. While she managed to return to Ruili before the city shut its doors to outsiders, a friend who was waylaid on the journey back has had to stay in another town, she said.

This is not Ruili’s first Covid-19 lockdown. In September, authorities sealed off the city and tested all its 200,000 residents after two people who illegally entered from Myanmar were diagnosed with Covid-19.

In an interview with state broadcaster CCTV on Thursday, Wu Zunyou, the chief epidemiologist at the China Center for Disease Control and Prevention, said the cause of Ruili’s outbreak was under investigation and was likely to have been brought in from abroad.

Zhang wrote in his Friday op-ed that China needed to guard against the threat of “imported” infections from overseas, adding that vaccinations and face masks would be the “main ways” that countries reopen over the next year or two.

Since a modest flare-up in multiple cities in January, the number of daily Covid-19 infections in China has hovered at near-zero.

Yunnan logged (link in Chinese) eight new infections on Friday, four of which were symptomatic, according to the provincial health commission. China does not list people as confirmed cases until they start showing symptoms.

The four new cases were China’s only new local infections on Friday, according to the National Health Commission. The Chinese mainland also recorded (link in Chinese) five imported infections, bringing the total case tally to 90,226. The death toll remained unchanged at 4,626.