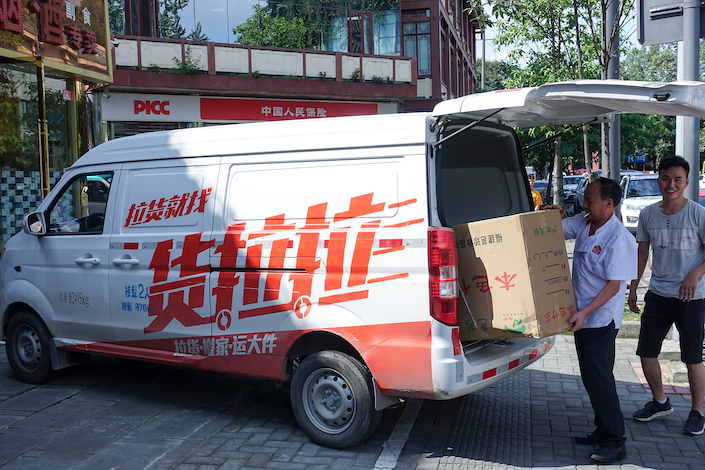 A Huolala driver unloads goods from a van.

Multiple regulators in Shanghai summoned operators of online freight service platforms Thursday after a series of incidents fueled concerns about lack of supervision of the emerging industry.

The regulators cited various illegal behaviors in the operation of online freight service platforms, such as advertising on vehicle bodies, use of passenger cars as freight vehicles, removal of vehicle seats without permission, operation without licenses, and transportation of hazardous goods without authorization, posing potential dangers to the city.

Shanghai Transit Police reported three incidents involving transportation of hazardous goods by vehicles operated by online freight service platforms. One was a leak of highly toxic, flammable chemicals involving a truck operated by Huolala. No one was injured.

The transit authorities ordered the online freight service platforms to strengthen verification of vehicles and drivers and provide operating data to regulators in a timely manner. Violators can be suspended and fined as much as 500,000 yuan, officials said.

In February, Huolala captured national headlines when a 23-year-old woman in the Central China city of Changsha died of head injuries after leaping from a moving Huolala van. She reportedly argued with the driver before the incident, but police said they found no signs of any physical attack.

Huolala posted an apology on social media, saying the platform “bears inescapable responsibility.” It also pledged to spend 600 million yuan ($91 million) in the next two years to improve user safety and driver screening, including installing data recorders in 10,000 vehicles.

The incident reignited public concerns over the safety of such online transportation services. There were two high-profile murders three years ago of female passengers who were raped by male drivers while using Didi Chuxing car services.