In Depth: Pandemic Proves a Boon for International Schools Setting Up Shop in South China 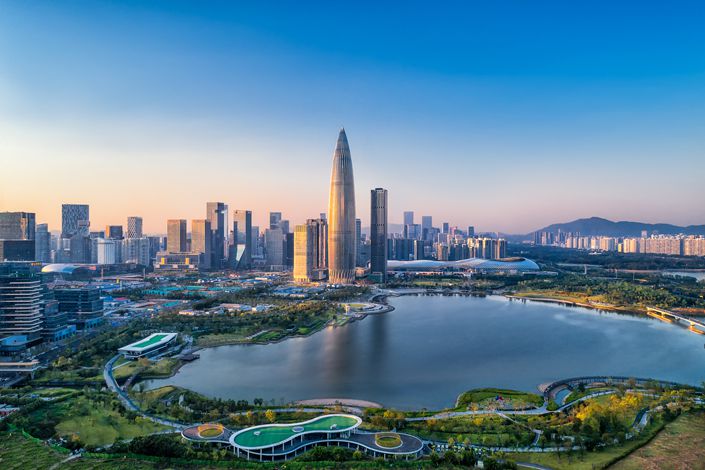 A Caixin count found that 11 new international schools are due to open in the Greater Bay Area tech hub of Shenzhen this year, reflecting the region’s flourishing market for global education. Photo: VCG

International schools in China are enjoying a boom in demand as Covid-19 travel restrictions limit the number of students seeking education overseas, according to enrollment data and interviews with industry insiders.

Demand is particularly high in the mainland portion of the so-called Greater Bay Area (GBA), an economic hub covering part of wealthy Guangdong province as well as Hong Kong and Macao, that until recently housed fewer international schools than middle-class strongholds like the cities of Beijing and Shanghai.

Among the main beneficiaries are British household names like Harrow, Dulwich and Wellington, whose China-based campuses have trebled in number in the past five years, according to preliminary statistics from the U.K. Department for International Trade (DIT).

Industry insiders say parents are snapping up places for their children as soon as they become available. One teacher at an international school in Shenzhen told Caixin the institution met its target enrollment in its first year of operation, adding that many parents continue to inquire about signing up their kids midway through the school year.

Alison Huang, the nonacademic deputy principal of the Shenzhen College of International Education, said the college receives about 10 applications for every available place.

The uncertainties caused by the pandemic may make Chinese families more cautious about sending their children abroad for their schooling and prompt many of them to opt for domestic bilingual or international schools instead, said Jo Hawley, the British consul-general in Guangzhou, the capital of Guangdong, adding that the trend, in turn, may provide new opportunities for China’s international school market.

British school brands are the frontrunners among the GBA’s burgeoning market for international education — a trend that reflects Chinese families’ long-held esteem for the U.K.’s iconic private schools.

In the region covered by the Guangzhou consulate — namely, the provinces of Guangdong, Fujian, Hunan, Guangxi, Jiangxi and Hainan — 10 British independent schools have opened either bilingual or international campuses since the start of 2020, bringing the total number to 17, according to the DIT.

Some 20 British brands are expected to operate 31 campuses in the region by 2025, the department says. Harrow School, Dulwich College and Wellington College will likely head the list in terms of the number of overseas campuses operating in China.

While British schools operating campuses in China adopt a number of business models, the most common is the so-called “management contract” system, whereby a Chinese partner invests in the facility’s construction and operations while the British side assumes responsibility for ensuring academic quality and certain other issues.

Key to British schools’ rapid expansion is their embrace of smaller cities with significant unmet demand. Dulwich and Harrow, for instance, have moved to establish campuses in Zhuhai, a city of 2 million people nestled next to Macao. Lady Eleanor Holles School, a 300-year-old independent day school for girls, has set up an overseas coeducational campus for the children of foreign nationals in Foshan, an industrial city of 7 million residents.

Such institutions satisfy the demand of many middle-class Chinese parents to send their children to schools with a formidable legacy and reputation, said Wang Xin, the founder of the Shenzhen International School Parent Association: “The school brand is the first concern for parents selecting an international school.”

Chinese investors are also muscling into the U.K.’s market for private education by buying up independent schools within the country itself, many of which are in financial distress as enrollment rates decline due to Covid-19 social distancing requirements.

At least 17 British private schools, among them the century-old Bournemouth Collegiate School and Riddlesworth Hall — best known as the former school of Princess Diana — have passed into Chinese hands in recent years, according to media reports.

In some cases, Chinese money has turbocharged the schools’ finances. One investor at a Chinese-funded institution that bought the U.K.’s Thetford and Wisbech grammar schools, who declined to be named so that they could speak freely, said the schools went from just about breaking even to highly profitable enterprises after the purchase, thanks partly to becoming boarding schools and enrolling the children of high-paying overseas families.

Industry insiders say the benefits to such deals are twofold: the investors both generate a steady cash flow from the schools’ daily operations and learn overseas educational concepts they can then duplicate in China.

Thetford Grammar now plans to operate “K12” — kindergarten through senior high school — campuses in Shenzhen and the eastern city of Ningbo in addition to its existing three prep schools in Shanghai and the central city of Changsha, said Helen Yang, a member of the school’s board of directors.

As tuition fees at top international schools have climbed, the companies that operate them have posted wider profit margins, according to analysis by Essence Securities. Maple Leaf Educational Systems, which runs 120 schools in 30 Chinese cities, posted a net profit margin of 33.3% last year, according to its annual report. The figure could grow further if demand holds.

Another type of investor is flocking into the international education market: real estate firms.

“One of the most challenging things” for British schools in southern China is securing land to build their often-vast campuses, Hawley previously told Caixin, noting that empty lots in cities like Shenzhen cost a “premium.”

Bright Scholar, which opened its first Country Garden property in Guangdong and pioneered the International Baccalaureate diploma program in China, listed on the New York Stock Exchange in 2017 and last year announced a 2 billion-yuan ($305 million) plan to set up a branch of Fettes College in Guangzhou’s Zengcheng district.

The British independent school, which is based in Edinburgh, Scotland, is sometimes called the “Eton of the North” as its reputation and tradition evoke its Windsor-based counterpart.