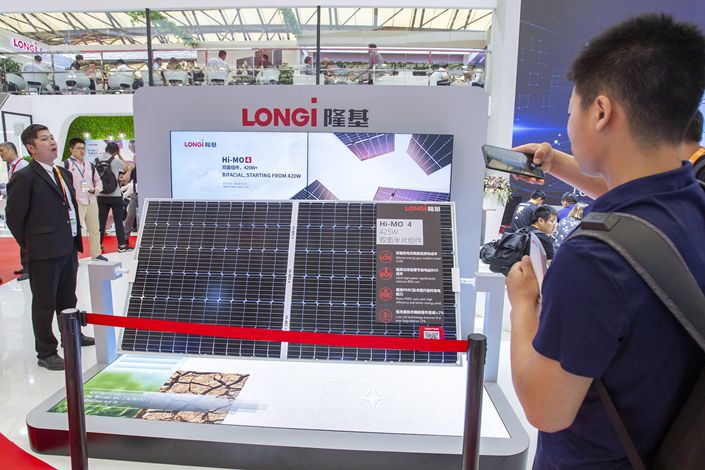 Longi’s move reflects a trend of higher integration between new-energy firms and the power storage business including hydrogen, an analyst said. Photo: VCG

China’s Longi Green Energy Technology Co. (601012.SH), the world’s top solar panel-maker, is moving into the hydrogen sector, a move that could allow for storage of excess solar power generated during the day for use during low-production periods.

Longi — which manufactures wafers, cells and solar panels — has established a hydrogen-focused subsidiary with Shanghai-based private equity fund Rosefinch Asset Management Co. Ltd. with registered capital of 300 million yuan ($45.67 million), according to the National Enterprise Credit Information Publicity System. It didn’t disclose how much each partner plans to invest.

The new company, Xi’an Longi Hydrogen Technology Co., was founded on March 31 and specializes in separation of gases and liquids, as well as the manufacture of purification equipment, according to the document. Longi’s founder Li Zhenguo will be the new company’s CEO and chairman.

China officially defined hydrogen — a clean energy source that produces power by combining with oxygen, with water created as a byproduct — as an energy source for the first time in April last year. As the country aims to achieve peak carbon emissions by 2030, the its state-owned energy conglomerates such as Sinopec are betting big on hydrogen despite marginal profits using current technology.

Such hydrogen-generated power is being seen as a potential solution to the erratic nature of renewable solar and wind power supplies, which are dependent on daylight and weather conditions to produce electricity. During peak periods, such solar and wind power stations often end up wasting power due to insufficient demand and having no place to store excess output.

The special form of hydrogen used in hydrogen power itself requires power to produce. Thus excess energy from solar and wind power stations generated during peak periods can be used to create such hydrogen, which can then be used to create electricity later using hydrogen fuel cells when the sun isn’t shining or winds aren’t blowing.

Solar power capacity is set to increase in the future, which means demand for storage will rise too, a solar power analyst told Caixin, adding that use of hydrogen fuel could be one way to address that issue.

China added 48.2 gigawatts (GW) of solar power capacity in 2020, up 60% year-on-year, according to the National Energy Administration, which predicted the energy source would edge ahead of wind to become the country’s third-largest electricity source by the end of 2020.

The rising amount of solar installation is making the (power) consumption problem one of the bottlenecks restricting large-scale development of solar power… and the solar-to-hydrogen model could effectively solve the problem” said Longi in a post on its social media account a day before the new hydrogen venture was formally established.

Longi’s move also reflects a trend of higher integration between new-energy firms and the power storage business including hydrogen, said the analyst, who added that tapping into the field could provide new momentum for Longi’s development.