Sinopec Doubles Down on Hydrogen Despite Demand Drought 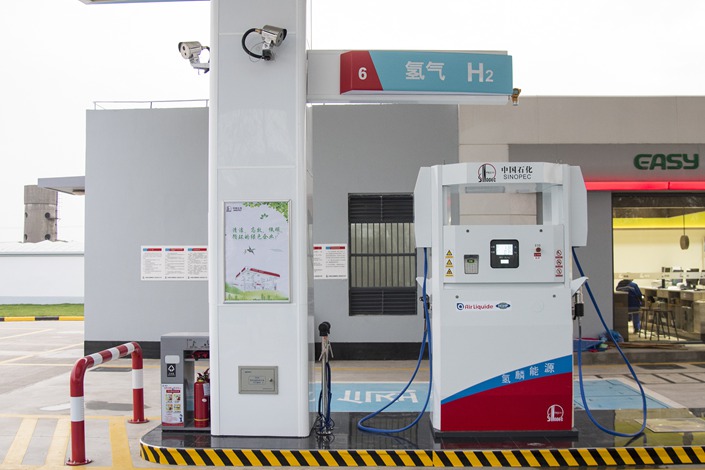 Oil and gas conglomerate China Petrochemical Corp. is doubling down on hydrogen with plans to build a network of fuel-cell refueling stations, despite low demand.

The company, known as Sinopec, has set its sights on operating 1,000 refueling stations selling solely hydrogen or both hydrogen and gasoline by 2025, according to a Friday report from state-run media outlet China Petrochemical News.

China had 127 hydrogen refueling stations by the end of 2020, up by 92% year-on-year, according to the China Hydrogen Alliance industrial group.

Hydrogen can be created from Sinopec’s core fossil fuel products, in addition to water. In a draft law published in April, the National Energy Administration official defined hydrogen as an energy source for the first time, opening the way for greater growth in the industry.

“The industry’s development will be accelerated if the infrastructure is built in advance,” a person with knowledge of energy policymaking told Caixin, saying that the construction of hydrogen refueling stations will be a prerequisite of the wider promotion of hydrogen fuel-cell cars.

At present, sales of hydrogen-powered vehicles are insignificant. Just 1,177 such cars were sold in China last year, down by 57% year-on-year following changes in policy toward the sector, data from the China Association of Automobile Manufacturers showed.

Utilizing Sinopec’s existing gas stations as venues for the new hydrogen refilling facilities could cut the costs of building out such a network, the person added. The company operates China’s largest chain of gas stations, with some 30,000 locations.

However the chairman of Shanghai Hyfun Energy Technology Co. Ltd., which operates such stations, warned that at present the business is far from lucrative. Stations are expensive and most have a low utilization rate, said Fang Feijun told Caixin.

However, Sinopec is undeterred.

In October, Sinopec announced a fund it set up in August 2020 had reached an agreement to develop technology to produce hydrogen fuel from water through electrolysis. The fund has an initial 2 billion yuan ($308 million) at its disposal.

Sinopec will focus on building hydrogen stations in the Yangtze River Delta, the Pearl River Delta and the Beijing-Tianjin-Hebei region, Chairman Zhang Yuzhuo said at an industrial conference last month.