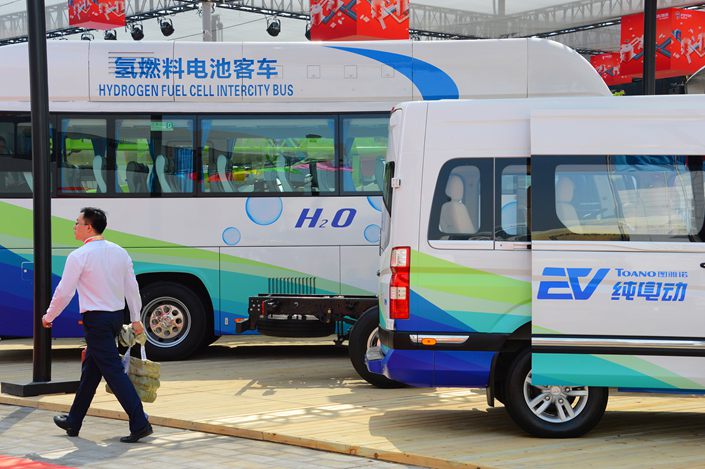 One senior industry official cautioned against too much optimism, noting that the technology is still relatively immature for transporting liquid hydrogen, which must be cooled down to temperatures just 20 degrees centigrade above absolute zero before becoming liquid.

China has issued a policy calling for development of standards governing storage of liquefied hydrogen at filling stations for the alternative fuel source, in its latest step toward trying to commercialize clean-burning hydrogen fuel-cell vehicles.

The first-ever mention of liquefied hydrogen in the latest draft version of standards for hydrogen filling stations from the Ministry of Housing and Urban-Rural Development comes as China looks to make the alternative fuel more affordable to compete with other types of vehicles now in use.

Hydrogen fuel-cell cars consume hydrogen in a compressed gas form, using a clean combustion process that produces water vapor as its main byproduct. But transporting and storing the fuel as liquid would provide a more cost-effective alternative to current technology that typically uses the fuel in its compressed gas form.

The Housing Ministry’s mention of liquefied hydrogen in the document released on Tuesday comes amid a broader regulatory push to commercialize the power source for use in cars. In April, China’s National Energy Administration issued a draft law that included hydrogen as an energy source for the first time. Previously, hydrogen was treated as a hazardous chemical substance unsuitable for use in transportation applications. Another document issued by the Ministry of Finance in April set a target to develop supply chains needed to produce hydrogen fuel-cell cars over the next four years.

A report issued at the start of this year during a Chinese forum on new-energy vehicles (NEV) pointed out that the U.S. transports 70% of the hydrogen it uses in liquid form, while most of China’s is transported as pressurized hydrogen gas. It explained the discrepancy by saying liquid hydrogen is used in China mostly in military aviation, while civilian uses lack concrete regulation.

Hydrogen-powered cars have yet to reach a commercialized stage in China and elsewhere due in part to their relatively high costs. In the current market, the hydrogen needed to power a fuel-cell car in China costs about 70 yuan ($10) per kilogram, estimated Fu Guanyun, a researcher at the National Development and Reform Commission (NDRC), China’s state planner. Fu estimated that needs to come down to less than 40 yuan per kilogram before hydrogen-powered cars can be truly competitive with traditional gas-powered ones.

Transporting hydrogen in liquefied form could help to bring down prices associated with the fuel. Based on experience in the U.S., Japan and Germany, the cost of transporting such fuel in liquid form is just one-eighth that of using the pressurized gas form, according to the report issued at the NEV forum at the start of this year.

In addition to the Ministry of Housing and Urban-Rural Development’s latest efforts, China has also been working on technology standards for the transport of liquefied hydrogen. A committee tasked on the subject issued a paper last June on technical requirements for the safe transport and storage of liquid hydrogen. A person involved with that effort told Caixin the draft is still being modified due to delays caused by the coronavirus outbreak.

But another senior industry official cautioned against too much optimism, noting that the technology is still relatively immature for transporting liquid hydrogen, which must be cooled down to temperatures just 20 degrees centigrade above absolute zero before becoming liquid.

The person pointed out that the processes involved with producing liquid hydrogen have already been commercialized and are mature, though a missing link lies in transport technology. The U.S. and Germany have built up some experience but are still at an early stage.

“Putting liquid hydrogen onto a vehicle requires all kinds of validation, sealing technology and so forth,” the person said. “So it’s hard to say whether it’s suitable for transport by vehicle.” The technology for vehicle transport of liquid hydrogen will probably take about five years before determining whether it’s feasible on a large-scale, Ouyang Minggao of the China Academy of Sciences previously told Caixin.

But such obstacles haven’t stopped some limited development from occurring in the hydrogen-powered vehicle space. Earlier this month Toyota announced plans to set up a Beijing-based joint venture with five Chinese companies to develop hydrogen fuel cells for commercial vehicles. And a year ago the country opened its largest hydrogen filling station in Shanghai with capacity to provide up to 1,920 kg of the gas per day.

More broadly, China is working hard to put more clean energy vehicles on its roads in an effort to clean up the nation’s polluted air. Most of that effort has focused on electric and hybrid vehicles, though that sector has moved into the slow lane over the last year after Beijing sharply reduced government subsidies in an effort to make producers more self-sufficient.