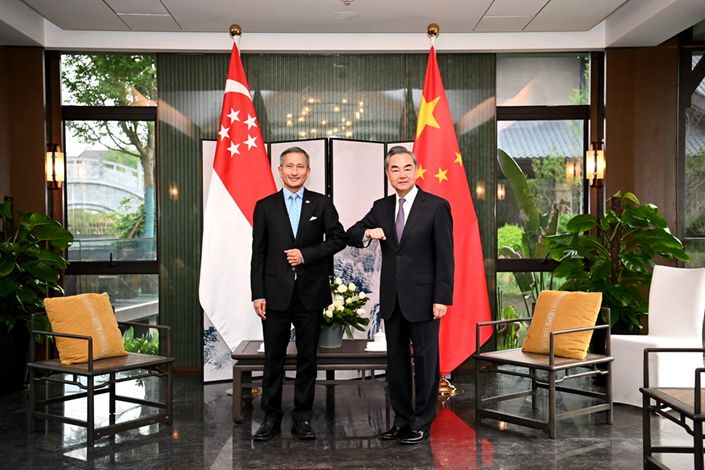 The marathon diplomacy began Wednesday when Wang met with his counterpart from Singapore, Vivian Balakrishnan, in Fujian, as the coastal province is the ancestral home of many overseas Chinese living in Southeast Asia.

In a series of meetings that lasted until Saturday, Wang met with Hishammuddin Hussein from Malaysia, Retno Marsudi from Indonesia and Teodoro Locsin Jr. from the Philippines.

Wang said that the five countries, including China, were calling on all parties in the troubled country to “exercise maximum restraint” to “avoid further bloodshed and civilian causalities to prevent the situation from deteriorating or even getting out of control.”

Myanmar is also a member of the 10-country Association of Southeast Asian Nations (ASEAN).

Wang also noted a potential downside to inaction. “We need to avoid inappropriate intervention by the United Nations Security Council, which would undermine Myanmar's sovereignty and further complicate the matters,” he said, without elaborating.

On Thursday, Christine Schraner Burgener, the U.N. Special Envoy for Myanmar, reportedly urged the U.N. Security Council to “consider all available tools to take collective action and do what is right, what the people of Myanmar deserve, and prevent a multidimensional catastrophe in the heart of Asia.”

Wang said that China supports seeking a political settlement among all parties in Myanmar, according to a statement released Monday by the Chinese foreign ministry.

The foreign minister said that China is willing to coordinate with and provide necessary assistance to ASEAN so that it can resolve the situation in Myanmar, according to the statement.

The string of meetings came as Myanmar’s neighbors have been conducting shuttle diplomacy to resolve the crisis. Singapore, Malaysia and Indonesia are seeking a special ASEAN summit on the issue, an idea that China has endorsed.

On Monday, Brunei, the chair of the ASEAN this year, agreed with Malaysia to hold the summit in Jakarta, Indonesia, though a specific date has not been announced.

In Fujian, Balakrishnan, the Singaporean foreign minister, and Wang discussed the “tragic” situation in Myanmar and expressed “alarm” over the recent escalation in violence, according to a statement issued by the country’s ministry of foreign affairs.