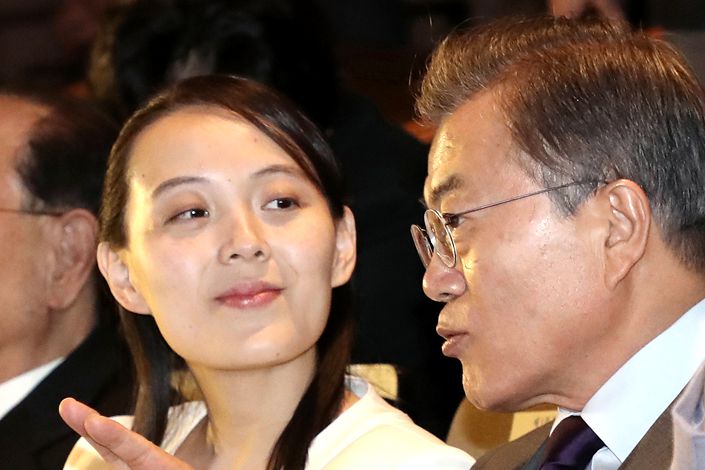 Kim Yo Jong, the sister of North Korean leader Kim Jong Un, had a message for the United States just as it and South Korea were finishing up their joint springtime military exercises in March.

“If (the U.S.) wants to sleep in peace for (the) coming four years, it had better refrain from causing a stink at its first step,” she was quoted as saying by North Korea’s state news agency.

Kim Yo Jong’s condemnation of the nine-day drills appeared shortly after the White House revealed that the Biden administration had tried to contact her country.

The exchange of sorts was the closest thing to communication between the two countries in more than a year, after attempts to rekindle a relationship by former U.S. President Donald Trump, who met with the North Korean leader three times during his term, stalled out.

On March 15, White House Press Secretary Jen Psaki told reporters that President Joe Biden’s administration had reached out to North Korea, but it hadn’t received “a direct comment or response.”

“Over a year without active dialogue with North Korea, despite multiple attempts by the U.S. to engage,” Psaki said at a White House news conference that day. “Diplomacy is always our goal. Our goal is to reduce the risk of escalation.”

Psaki’s remarks followed a flurry of news about the U.S.’ behind-the-scenes efforts to communicate with North Korea.

The reports cited an anonymous U.S. official who said there had been efforts to reach out to the North Korean government “through several channels starting in mid-February.”

“To date, we have not received any response from Pyongyang,” the official said.

At the White House news conference, Psaki didn’t explain how the U.S. had attempted to reach North Korea, nor did she disclose its message. Although the two sides don’t have formal diplomatic relations, the U.S. has several ways to contact North Korea, including the North Korean mission at the United Nations, a “secret back channel” that the CIA established with North Korean intelligence during the Obama administration, and the country of Sweden, which has diplomatic relations with both countries and often acts as an intermediary.

Some analysts reckoned that the administration sought to contact North Korea to warn it against escalating tensions in the region by conducting missile tests just after Biden took office — something the country has done after previous U.S. presidential transitions.

The North Korea leadership has not mentioned Biden’s election, though it has discussed the U.S. “Our foreign political activities should be focused and redirected on subduing the U.S., our biggest enemy and main obstacle to our innovated development,” Kim Jong Un said at a Worker’s Party Congress meeting early January 2021, according to Reuters. “No matter who is in power in the U.S., the true nature of the U.S. and its fundamental policies towards North Korea never change.”

Kim planned to deal with the U.S. “on the principle of power for power and goodwill for goodwill.”

Observers believe that Kim Yo Jong’s massage was not in response to the military drills, so much as the “two-plus-two” meeting of top South Korean and U.S. foreign and defense officials that took place in South Korea on March 17 and March 18.

U.S. Secretary of State Antony Blinken and Defense Secretary Lloyd Austin left for the region on March 15. They visited Japan and South Korea. Notably, the top officials were accompanied by Sung Kim, an expert on the North Korean nuclear issue and acting assistant secretary of state for East Asian and Pacific affairs.

Sung told reporters March 12 that Blinken would discuss the North Korean nuclear issue with his Japanese and South Korean counterparts during the trip. He said that the U.S. has not changed its commitment to complete denuclearization on the Korean Peninsula.

In 2019, North Korea tested short-range ballistic missiles in what some assumed was a tactic to pressure the U.S. and South Korea into restarting talks, though it stopped short of conducting nuclear tests and the range of the missiles did not reach that of an intercontinental ballistic missile.

Analysts believe that Kim Yo Jong’s condemnations probably mean that North Korea was keeping a close eye on the outcome of the meeting.

North Korea is hoping that the U.S. will show meaningful concessions and restraint and that South Korea will respond to its concerns with real action, the analysts said.

In her statement, Kim Yo Jong, who is also the vice department director of the Central Committee of the ruling Workers’ Party of Korea, also slammed South Korea, though left the door open to resuming talks.

She mentioned that Kim Jong Un had taken a positive outlook toward North-South relations. Those relations could return to a new starting point of peace and prosperity as seen during the detente following the North Korean leader’s summit with South Korean President Moon Jae-in in April 2018, she said.

However, if South Korea continued to take orders from the U.S., she warned that “the warm spring days seen three years ago will not come again.”

Kim Yo Jong also threatened to dissolve the Kumgangsan International Travel Co., the North Korean agency created in 2011 to allow residents of the South to tour Mount Kumgang in the North. She said that the cooperation and exchanges facilitated by such organizations would no longer be needed “with the South Korean authorities antagonizing us.”

Before taking office, Biden had criticized Trump’s efforts to meet the North Korea leader, saying it not only granted the country more legitimacy, but also allowed it to continue to develop ballistic missiles that are capable of reaching the continental U.S.

Biden said he could meet Kim Jong Un if the latter moved to reduce his nuclear arsenal.

However, the administration has not come up with a complete and clear framework on North Korea policy since Biden took office in January. Observers expect that he will not make it a priority due to challenges from Covid-19, the economic recovery, and China.

The White House revealed that the U.S. had attempted to contact North Korea just as its top officials were about to visit South Korea and Japan. According to an analysis from South Korean newspaper JoongAng Ilbo, the moves have two purposes.

First, the U.S. wants to reassure its allies in the region that are deeply concerned about North Korea, signaling a nuclear-free Korean Peninsula remains on its diplomatic agenda.

Second, the efforts will give the U.S. advantage, or pretense, to sanction North Korea if the hermit country chooses not to respond to U.S. entreaties.

However, the process of coordinating with U.S. allies will not be easy.

South Korea’s progressive government has advocated for using the diplomatic legacies of the summit meetings between U.S. and North Korea leaders as a jumping-off point for talks. The peace process in the Korean Peninsula can be resumed through dialogue and goodwill, according to an analysis by the Hankyoreh, a South Korean newspaper.

However, Japan has argued that North Korea’s development of nuclear weapons and multiple ranges of ballistic missiles should be fully addressed before making any concessions.