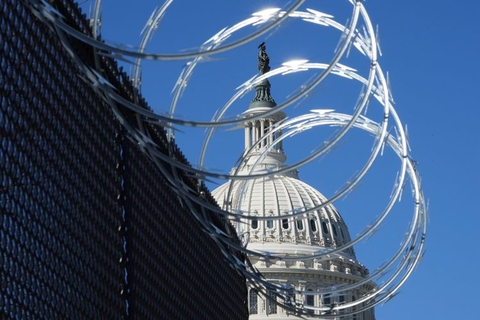 (Bloomberg) — The U.S. Senate’s approach to counter China is taking shape with a bill introduced Thursday directing the U.S. government to adopt a policy of “strategic competition” with China to “protect and promote our vital interests and values.”

The 283-page bill crafted by the Senate Foreign Relations Committee is part of a push by Democratic Majority Leader Chuck Schumer to vote this spring on a broad, bipartisan package designed to confront China’s economic and geopolitical power. The measure seeks infrastructure investment and technology developments to compete with China on global supply chains, science and technology.

“The United States government must be clear-eyed and sober about Beijing’s intentions and actions, and calibrate our policy and strategy accordingly,” Senate Foreign Relations Chairman Bob Menendez said in a statement. “That is the only way we will get the China challenge right -- a bipartisan commitment to mutual trust and good-faith compromise, balancing pragmatism and idealism, and a shared dedication to finally solving” one of the toughest challenges facing the nation.

The bill would strengthen arms-control measures with U.S. allies and require reports on Chinese weapons and space systems. It contains provisions to defend intellectual property, enforce export controls and follow Chinese firms that are listed in the U.S.

It would also expand the jurisdiction of the Committee on Foreign Investment in the United States (CFIUS) to include American colleges and universities if they receive more than $1 million in gifts from a foreign person or entity. The bill text cites testimony from FBI director Christopher Wray alleging that China is using the open research and development culture of higher education in the U.S. to steal intellectual property.

“The introduction of this legislation is one important step towards ensuring the United States is postured to compete with China for decades to come,” said U.S. Senator Jim Risch, an Idaho Republican and the ranking member of the Foreign Relations committee. “I look forward to a robust and inclusive amendment process for all the members of our committee when it marks up this legislation.”

“Certain individuals in the U.S. should abandon their Cold War, zero-sum game mentality, look at China and bilateral relations in an objective manner, and stop pressing ahead with the negative bill that harms China’s interests and sovereignty,” he said.

In addition to Menendez’s legislation introduced Thursday, the centerpiece of Schumer’s broader plan is the Endless Frontier Act, a bill to boost U.S. semiconductor development, which he introduced last year with Indiana Republican Todd Young. The Senate Commerce Committee will hold a hearing on that proposal on April 14. The Foreign Relations panel is scheduled to act on its bill the same day.

Pieces of the total package will be considered by eight different committees, involving both new proposals and some that were introduced in previous sessions of Congress.

The Foreign Relations bill, called the Strategic Competition Act, is the product of a weeks-long attempt by Republicans and Democrats to compromise on different proposals from the two parties.

Menendez said he has “committed to continue working together in common cause so this major piece of legislation is enacted swiftly and through regular order” with his Republican colleagues.

“The scope, scale and urgency of the China challenge demands nothing less,” Menendez said.