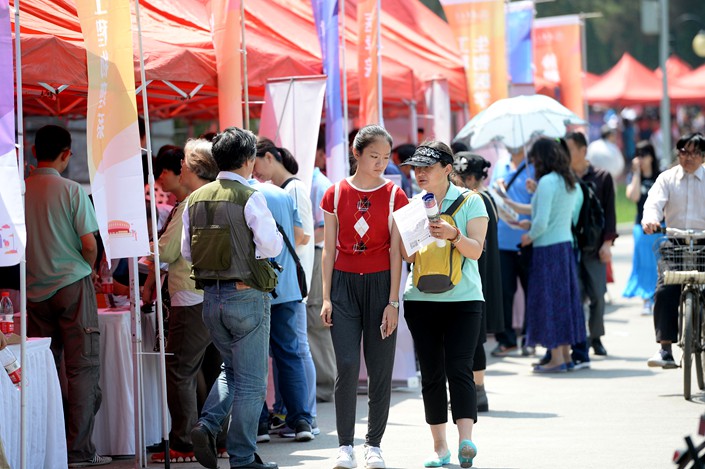 Eligible students should be interested in serving the country’s major strategic needs, and stand out in any of 10 basic disciplines, including math, physics, chemistry, biology, history and philosophy. Photo: VCG

According to plans issued as of Tuesday for next academic year, the 36 pilot universities have expanded their criteria in the hope of admitting more applicants for basic research and advanced technology courses.

The changes are in response to fewer than expected students applying last year, due both to students and parents preferring more popular majors, such as finance and economics, over math or physics.

The universities are members of the Strong Foundation Plan, launched last year to select and train students to ease the ongoing shortage of talent in areas including high-end chip and software design, intelligent technology and social sciences, according to a statement issued by the Ministry of Education.

Eligible students should be interested in serving the country’s major strategic needs, and stand out in any of 10 basic disciplines, including math, physics, chemistry, biology, history and philosophy, the statement said.

Successful applicants with excellent academic results in their universities can qualify for benefits such as study abroad programs and scholarships, it added.

The new guidelines are aimed at boosting the number of students admitted in the initial assessment phase of the courses. The 36 universities haven’t yet announced the final number of approved students they plan to enroll.

“The purpose of increasing the number of shortlisted applicants is to boost the pool of students who can get enrolled in the universities,” said Xiong Bingqi, head of 21st Century Education Research Institute.

Some universities that participated in the program last year couldn’t attract enough talented students to enroll in the relevant technology courses.

Fudan University in Shanghai failed to meet its first round enrollment quota under the plan last autumn. It did a second round to admit another 124 students across eight majors to fill the gaps.

People familiar with the matter told Caixin the program involves basic disciplines and is unattractive to high school graduates who tend to choose finance and economics when they enter university.

Incentives have been added this year to lure more talented students. For example, Peking University has implemented a tutorial system, appointing lecturers, top-notch young scholars and members of China’s prestigious national academies as tutors and class head-teachers. Meanwhile, Fudan University plans to use group classes to train students this autumn, Caixin has learned.

“The key to improving the program’s attractiveness is to cultivate students’ interest in basic disciplines and improve the quality of talent training,” Xiong said. He believes it is necessary to change public perception of the basic subjects.