Trucker Slashes Own Wrist After Being Stopped for Overweight Load 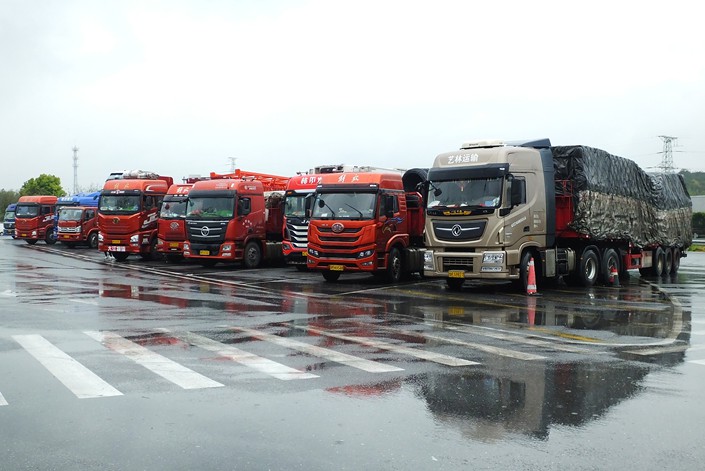 Truck driver Zhao Hongjun publicly slit his wrist Monday and needed 14 stitches after he was fined 500 yuan for driving a truck over the weight limit. Photo: VCG

A dramatic act of self-harm by a truck driver who was stopped at a weigh station in Guangdong for carrying an overweight load has cast a spotlight on the pressures such workers face for the second time within a week.

Zhao Hongjun, a driver from Shandong, publicly slit his wrist and needed 14 stitches and hospital treatment after staff tried to fine him 500 yuan ($76.50) for driving a truck over the weight limit.

Zhao had set out on Saturday in a truck loaded with metals from the Shandong city of Zibo for the southern city of Foshan adjacent to Guangzhou, he said in a video he posted online. He said that he had driven over 1,500 kilometers, passing through multiple weighing stations on the way without incident.

But that changed when he reached Qingyuan, a city in Guangdong province, on Monday and was told that his truck weighed 50.24 tons, which was over the 49 ton limit. After failing the first and second attempts at the station, Zhao was denied a third chance.

After negotiating without success for another hour and a half, Zhao cut his wrist and was sent to the hospital, according to his video. He was granted a third attempt after that, which showed his truck weighed 49.66 tons. So he was finally let through without a fine, under policy that says drivers receive a simple warning if they exceed the limit by less than one ton.

Wang Jinwu, a high-profile truck driver who often speaks out for fellow truckers, told Caixin that once a truck is deemed overloaded, the driver has to pay the fine and offload goods before being allowed to hit the road again. That process can be time-consuming for drivers who are already under immense pressure to deliver goods as quickly as possible and take on more work.

“It takes time to offload the goods and you might not be able to leave on the (same) day, which could affect the delivery time,” he said, adding that drivers are also responsible for any costs associated with offloaded goods.

Chinese truckers have long complained of arbitrary or excessive fines for perceived infractions of traffic rules. The size and nature of such loads varies widely in China due to the country’s rapid modernization, which has led to the presence of both modern trucks and much older, precariously-loaded ones sharing the same highways.

The incident came a week after Jin Deqiang, a 50-year-old driver from North China’s Hebei province, was fined 2,000 yuan for using his vehicle without a functioning global positioning device, and subsequently killed himself by drinking pesticide at a vehicle inspection site.

Hours before his death, Jin wrote a message on popular social messaging app WeChat slamming local traffic police for fining him, and said he hoped his planned suicide would “awaken the leadership to the importance of this matter.”

A survey published in 2018 by the Social Sciences Literature Press showed that truckers in China pay an average of 2,974 yuan per year in fines for violations like running red lights, parking illegally, speeding and driving overloaded trucks. In 2017, the country’s transport ministry ordered a crackdown on the widespread practice of penalizing drivers with no legal basis.