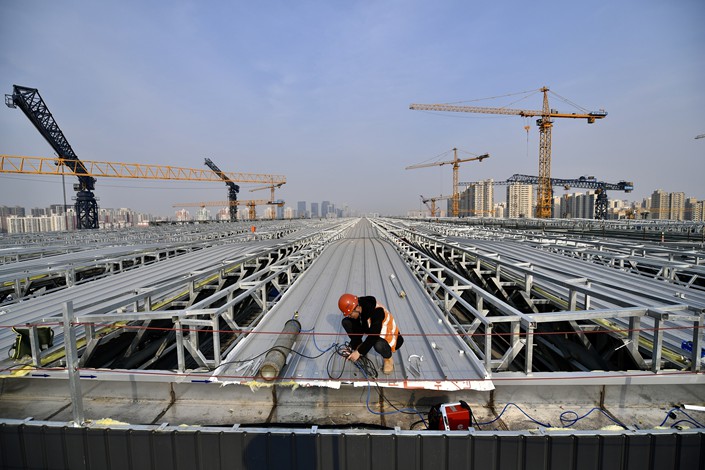 China’s GDP grew 18.3% year-on-year in the first quarter of 2021 on the low comparison base from the same period last year amid the Covid-19 outbreak, official data showed Friday.

Economic growth gained momentum in the wake of a record 6.8% contraction in the first quarter last year, but was slightly slower than the median estimate of 18.8% (link in Chinese) growth in a Caixin survey of economists.

The economy recovered steadily as first-quarter GDP was up 0.6% from the fourth quarter last year and 10.3% from the first quarter of 2019, according to a statement (link in Chinese) from the National Bureau of Statistics (NBS).

“The trend of economic recovery continued in the first quarter, and positive factors were accumulating,” NBS spokesperson Liu Aihua said at a Friday briefing (link in Chinese).

An indicator for the broader consumption picture delivered positive signals. Retail sales, which include spending by households, governments and businesses, rose 34.2% year-on-year (link in Chinese) in March, up from a 33.8% increase for the first two months. The reading beat the median forecast for a 29% increase in the Caixin survey.

The acceleration of retail sales growth in March may be a result of pent-up demand being released after Beijing lifted travel restrictions that were imposed to prevent the emergence of further Covid-19 cases over the Lunar New Year holiday, economists at Nomura International (Hong Kong) Ltd. wrote in a note.

Also on the demand side, unlike retail sales, investment growth slowed as the low baseline effect faded. Fixed-asset investment, a key driver of domestic demand, grew 25.6% year-on-year (link in Chinese) in the first quarter, decelerating from a 35% rise in the January-to-February period, according to NBS data. The rate was higher than the median forecast of 24.8% growth in the Caixin survey.

Infrastructure investment, which consists of spending on road and railway construction and is generally led by the government, rose 29.7% year-on-year in the January-to-March period, decelerating from a 36.6% increase in the first two months.

Investment in real estate development rose 25.6% year-on-year (link in Chinese) in the first three months, decelerating from a 38.3% rise in the January-to-February period.

Although manufacturing investment rose 29.8% year-on-year in the first quarter, faster than fixed-asset investment growth, the NBS spokesperson said it was still below the pre-pandemic level, citing manufacturers’ weak confidence.

On the supply side, value-added industrial output — which measures production by factories, mines and utilities — grew 14.1% year-on-year (link in Chinese) in the month of March, lower than the median forecast in the Caixin survey for 15% growth. The growth was down from a 35.1% increase in the January-to-February period.

“We expect the economy to continue to gain momentum in Q2,” Louis Kuijs, head of Asia economics at research firm Oxford Economics Ltd., said in a Friday note, adding that less generous fiscal and monetary policy will weigh on infrastructure and real estate investment, while improved profitability and confidence will likely buoy corporate investment and consumption.