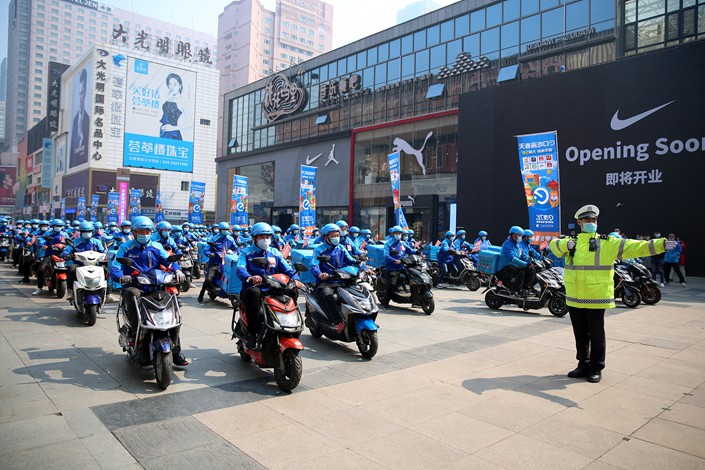 In their pledges, the companies vowed to follow Chinese laws and foster a healthy market environment built around fair competition. Photo: VCG

Each of the 34 Chinese internet giants hauled in for a dressing-down by China’s market regulator this week has now issued a public statement vowing to obey the nation’s laws.

The State Administration for Market Regulation (SAMR) published the statements in three batches on its website between Wednesday and Friday.

It comes less than a week after the SAMR fined Alibaba a record 18.2 billion yuan ($2.8 billion) fine for breaching Chinese antitrust laws, and days after the meeting — held with China’s cyberspace and tax agencies — in which the firms were told to investigate themselves and rectify any illicit behavior.

The companies were told that after a grace period of one month they would face “severe punishment” for engaging in a raft of outlawed activities ranging from abusing their market dominance and violating data privacy rules to tax evasion.

In their pledges, the companies vowed to follow Chinese laws and foster a healthy market environment built around fair competition.

Alibaba, which was fined Saturday for anticompetitive behavior including forcing vendors on its online shopping platforms Taobao and Tmall into exclusivity deals, promised (link in Chinese) to strictly abide by antimonopoly and e-commerce laws as well as regulations for online purchases, adding that it would not engage in exclusivity arrangements or other forms of unfair competition, protect consumer rights and interests, and strengthen internal governance.

E-commerce firms including the New York-listed Vipshop and Nasdaq-listed JD.com made similar vows.

Gaming giant NetEase, which is also listed on the Nasdaq, vowed (link in Chinese) to take similar action.

Amid its deepening push into live-streamed e-commerce, ByteDance — which operates TikTok and its Chinese sister platform Douyin — and Kuaishou committed to ridding their short-video platforms of shoddy goods and unsafe food products.

Alibaba’s stock price has surged this week as investors reacted with renewed optimism to a penalty that did not include forced divestment of assets, the recovery of illicit gains or other severe measures.