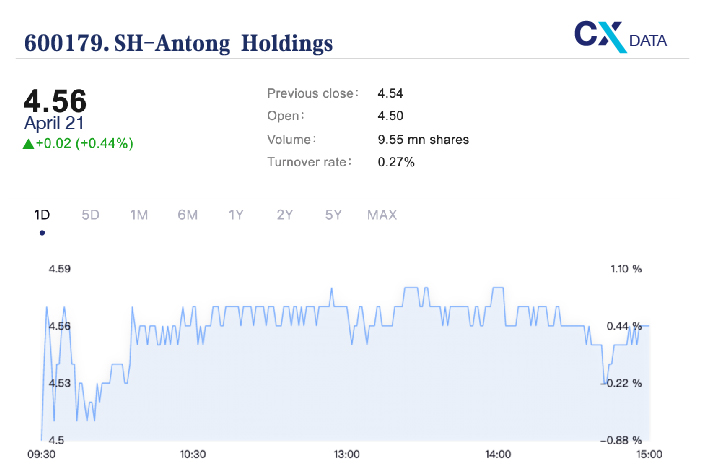 Freight firm Antong Holdings Co. Ltd. (600179.SH) has applied to remove a high risk label placed on its stock by the Shanghai bourse last year when it was being swamped with debt and becoming embroiled in an embezzlement scandal, now claiming it has resolved these issues.

The company’s financial situation improved in 2020 and all the funds embezzled by its former controlling shareholder had been recovered, thus it no longer warranted the risk warning, Antong said in two separate filings to the Shanghai Stock Exchange Tuesday. The bourse will make a decision within 10 working days of receiving the application, the company said.

“The financial situation that made it subject to the delisting risk warning has been eliminated,” the company said in the filing.

On China’s main bourses companies that are in dire financial straits and risk being delisted are sometimes labeled with “*ST”, signifying “special treatment,” in order to flag that risk to investors.

Shares of the Shanghai-listed company were slapped with *ST status in May as one if its creditors tried to get the company delisted in the hope of recovering billions in loans. Compounding its woes, Antong’s then-controlling shareholder embezzled 1.3 billion yuan ($198.4 million) from company coffers, while the company also guaranteed over 6.3 billion yuan to external entities, about 4 billion yuan of which remained outstanding by end of June.

Antong, which primarily ships domestic freight, said in its 2020 annual report (link in Chinese) that starting from the third quarter of last year, its business has received a boost from a rebound in domestic consumption fueled by supportive central government policies and as the domestic Covid-19 epidemic was brought under control.

A shortage of international shipping capacity in the overseas market also pushed up prices domestically, boosting profits, Antong said in the report.

In March 2020, Avic Trust, which is one of Antong’s creditors, sought a court order forcing Antong into reorganization because the company had failed to pay off debts that came due. In September, a court in East China’s Fujian province obliged, ordering Antong into reorganization, ruling that the company would face bankruptcy and delisting if it failed to properly reorganize, according to a company filing (link in Chinese) in September.

In October, Antong revealed a plan to issue 2.88 billion shares by converting its capital reserve based on its total share capital of 1.49 billion shares, as part of its reorganization, according to its October statement (link in Chinese). About 1.3 billion shares were set to be sold to investors, while the rest would be used to repay the debts of Antong and its two core subsidiaries, the company said.