In Depth: Inside the System Driving Truckers to the Edge — While Monetizing Their Data

By Fang Zuwang, Huang Rong, An Limin and Jiang Yaling 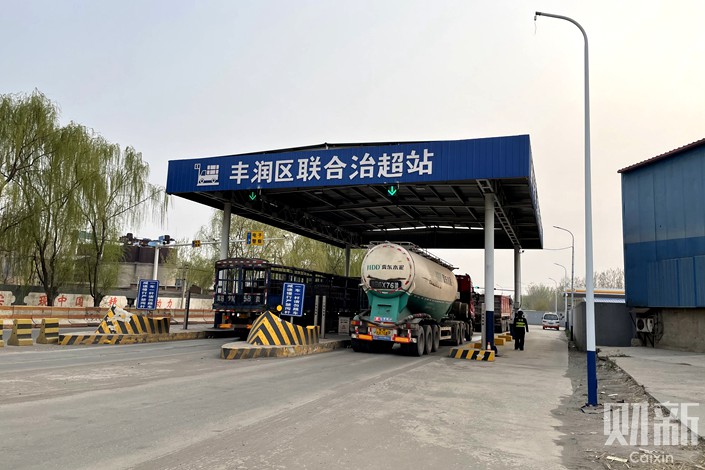 Each day in China, millions of long haul trucks over 12 tons in weight set off, pass through weigh stations, and reach their destinations. By law, almost all require a small black device to be mounted above the driving seat — a transponder that feeds into a national system that monitors traffic flows, keeps tabs on drivers, and aims to prevent them speeding or falling asleep.

On April 5, at a checkpoint in Hebei province, a middle-aged trucker was fined 2,000 yuan ($305) when local police found his transponder was disconnected.

For 50-year-old Jin Deqiang, it was the final straw. His suicide at the checkpoint later that day is now under investigation by Chinese authorities. In a note posted in a WeChat group of other truckers, he slammed the police for fining him and said his death would be an attempt to “awaken the leadership to the importance of this matter.”

Caixin spoke with a number of truck industry veterans and chose not to publish their names to head off repercussions they might face for speaking candidly. Jin Deqiang’s death resonated among them, as did the role of the small black device that apparently drove him over the edge.

Originally mandated for a higher purpose by the Chinese government — to prevent accidents and improve road freight management — the devices are costly for drivers, who need to pay around 2,500 yuan to install them, and 600 yuan each year thereafter. If regulators detect they are no longer sending traffic data, drivers can be fined about 800 yuan. If they are believed to have intentionally damaged it, they face steeper fines of between 2,000 and 5,000 yuan.

The transponders run using China’s BeiDou Navigation Satellite System, developed as a rival to the more widely used Global Positioning System (GPS) developed by the U.S. As of mid-2020, China had launched all 55 satellites needed to support the system.

After Jin’s death became public knowledge, sympathetic online spaces were awash with anger and grief directed at the BeiDou system and at the apparently callous response of law enforcement. But less scrutiny has fallen on the role of a massive company that runs China’s freight vehicle monitoring program: Beijing Zhongjiao Xinglu Information Technology Co. Ltd., known in English as Sinoiov.

Driven by rapid growth in e-commerce, the scale of China’s road freight industry has grown enormously in recent years. The result has been a steady stream of fees and fines for China’s truck drivers, and a steady flow of digital gold — monetizable data from the millions of trucks that drive across the country each day — back to Sinoiov.

The story of China’s “internet of vehicles,” as the smart freight sector is sometimes called, begins in the late 2000s when satellite navigation began to be baked into logistics. The industry’s firms began fitting vehicles with transponders in order to beam back location data and keep tabs on their drivers. Most of those platforms were built in-house.

The paradigm shifted in 2010 as Shanghai readied itself to host the World Expo. Security concerns drove China’s Ministry of Transport to build a national vehicle tracking system that launched in April that year. This is when freight vehicle tracking was elevated from the corporate level to the purview of the central government.

China’s freight data initially flowed up through lower level administrative divisions. “If a vehicle registered in Guangdong was driven into the Guangxi Zhuang autonomous region, the system would push its information to [regulators in Guangxi]. It shared the regulatory process across administrative regions,” one industry insider said.

That changed when China’s National Public Supervision and Service Platform for Road Freight Vehicles went live in 2013. The platform, which belongs to the Ministry of Transport, was built and is run by Sinoiov. It includes mandatory enrolment for almost all heavy trucks above 12 tons in weight, and sees all of its data directly uploaded to Sinoiov’s back office.

Founded in 2004, Sinoiov had two major stakeholders at its inception. One was a subsidiary of the China Transport Telecommunications & Information Center (CTTIC) under the Ministry of Transport, which has jurisdiction over the system. The other was Nasdaq-listed China Transinfo Technology Ltd., a smart transport services provider known for linking faculty and students from China’s top-tier universities of Peking and Tsinghua with startups in the field.

The ownership structure has changed over the years, with CTTIC dropping out of stakeholders in 2015, and companies affiliated with Transinfo gradually taking over.

By the end of 2020, the platform had become the largest user of BeiDou satellite data, according to the company’s corporate blog on Sina.com.

At the transponder installation side of the market, each province has dozens of service providers. They are audited by the Ministry of Transport and registered at local traffic control departments to do their business.

The market is largely fragmented. The vehicles need to be registered locally to obtain their operating licenses and have to pass an annual inspection, which means local authorities have the power to appoint their on-board devices. “Whoever is tighter with the traffic control departments can have their names go into the local catalog,” an industry veteran told Caixin.

Sinoiov has made inroads into that business too. As the operator of the top level freight vehicle tracking system, it has set up subsidiaries across the country to promote the tracking device.

Li Jinghe, a Sinoiov executive, said in a public speech in August that 6.5 million vehicles are connected to the public platform of freight vehicles that Sinoiov runs, and more than 1.5 million vehicles have the device installed by Sinoiov, opening another revenue stream in transponder purchase and service fees.

“There are thousands of service providers in China, and Sinoiov is a big player among them. It has a natural advantage given its (position),” a Sinoiov executive told Caixin.

Sinoiov is now making forays into the insurance business too, teaming up with large insurers to make use of its vast trove of data. Sunshine Insurance Group Corp. Ltd., which specializes in property and casualty insurance and life insurance, has a 2.35% stake in the company. Sinoiov lists other big insurers including China Pacific Property Insurance, Ping An and China Life as partners.

Local governments are motivated to work with Sinoiov, because those who regulate traffic flows may need the company’s help to interpret raw data from the national platform, experts said.

The unique market spread has made Sinoiov a darling of the capital markets. In 2018, as tech giant Alibaba Group Holding Ltd. marched into smart transportation, capital flowed into Sinoiov. In May 2019, Alibaba became the firm’s second-largest stakeholder with a 3.6 billion yuan capital injection.

Hangzhou Hopechart Iot Technology Co. Ltd., one of Sinoiov’s series B investors disclosed last year that it planned to acquire a less than 1% stake of the company for 50 million yuan, putting its valuation higher than 5 billion.

Meanwhile, the financial pressure on truckers only stands to grow. Some provinces are looking to adopt even more intrusive worker surveillance techniques such as smart video camera systems. A procurement announcement by the Guangzhou Association of Highway Transportation Industry in May 2019 shows that the average price of each system was around 4,100 yuan.

Cui Xiankang contributed to the story.