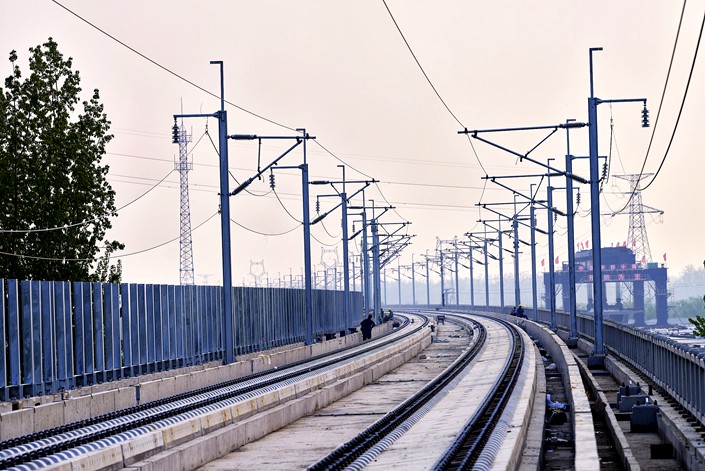 Work on a 270-kilometer line connecting Jinan, capital of East China’s Shandong province, and the city of Zaozhuang in the province’s south, was suspended last month, Caixin has learned. The other action saw work come to a halt this month on three lines with planned total investment of 71.6 billion yuan being constructed as part of a project called Guanzhong Chengji, which consists of 13 lines in Northwest China’s Shaanxi centered on the provincial capital of Xi’an.

A person close to the Shandong rail system told Caixin that work on the Jinan-Zaozhuang line was halted partly because a section of the line was too similar to a stretch of the Beijing-to-Shanghai high-speed rail line that has operated for years. The new line was being funded by the Shandong provincial government and had total planned investment of 58.5 billion yuan.

Meantime, the Guanzhong Chengji project’s suspension was announced on the website of the Shaanxi government’s branch of the national state planner in a posting dated April 12. That posting stated: “The province has done an integrated review of the situation regarding rail construction and finances, and has suspended work on the Guanzhong Chengji project to lower risk levels.”

The post made it clear the halt applies to all parts of the project that are both under construction or have yet to begin. It further clarified that “deep research” will now be conducted by the provincial transport and rail authorities before deciding on the next step.

China has relied heavily on building infrastructure like high-speed rail to maintain its fast economic growth, and such construction has become a policy tool to stimulate the economy during slowdowns. But some worry that overuse of such policy could lead to dangerously high debt levels, and also result in projects that are ultimately poorly designed and underutilized.

In March the State Council released a document on the development of the nation’s rail system, partly aimed at stopping local governments from blindly building new projects and taking on dangerously high debt loads, a person close to the government’s policy-making apparatus told Caixin.

The document stressed the importance of building out high-speed rail infrastructure in a balanced way, with a ban in principle on construction for new projects with expected utilization rates below 80%. The document also laid out conditions for construction of the most expensive rail lines capable of traveling up to 350 kilometers per hour, limiting them mostly to routes between major cities with large passenger volumes.

China’s rapid high speed rail buildup over the last decade has created the world’s biggest system of its kind with about 38,000 kilometers of track at the end of last year — equal to about a quarter of the national rail system. But with service now widely available between most major cities, many local governments have turned to construction of lines on less-traveled routes that may never be able to operate profitably.

Such projects have put big debt pressure on provincial governments due to the big amount of investment required and the long periods required to recoup that investment. At the same time, the national rail operator has gradually been hiving off lines with poor profitability to local governments through equity exchanges, increasing the financial pressure on those governments.