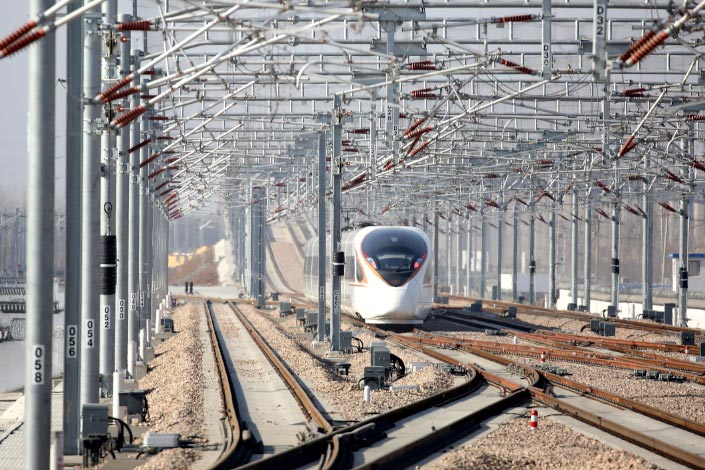 China is introducing guidelines to limit new high-speed rail construction along underused routes, as it seeks to prevent projects that give short-term boosts to local economies, but add to regional governments’ already huge debt piles.

If a high-speed rail route is operating at less than 80% of its designed capacity, then a second line shouldn’t be built covering the same route, according to guidelines jointly released by the country’s top economic planner and the transport authority on Monday.

The guidelines also say that new high-speed rail links should only be built to cities that already see more than 15 million total inbound and outbound trips per year. The guidelines also called for tightening scrutiny over traffic volume and punishing those who fabricate data.

Constructing new high-speed rail routes has offered local governments a straightforward way to boost their economic figures in recent years, with the provinces of Hebei and Shandong both previously bringing up the idea that all of their cities should have such rail links, though these plans have not come to fruition.

“During railway planning and construction work, some places have problems with purely pursuing high standards, high speeds and high investment,” the guidance said, adding the pursuit of costly high-speed lines has left some projects with poor business performance and heavy debt burdens.

With the exception of the busiest lines between the biggest cities, like that which connects Beijing and Shanghai, China’s high-speed rail network loses money. The goal of the new guidelines is to prevent further expansion, and existing projects will be unaffected, a person familiar with the matter told Caixin.

CR is one of many state-owned enterprises cutting their budgets for 2021. The railway operator said its funding from the central government had dropped 98% from last year, as the number of projects approved by the National Development and Reform Commission had fallen.

The company’s Chairman Zhang Dongfu said earlier that China would build 12,100 kilometers of high-speed rail through 2025, down 32% from the five years to 2020.

The guidance said railway debt should be within a “rational range” by 2035, without offering a specific figure. CR’s total debt amounted to 5.57 trillion yuan ($849 billion) at the end of September last year, taking its debt-to-asset ratio to 65.8%.