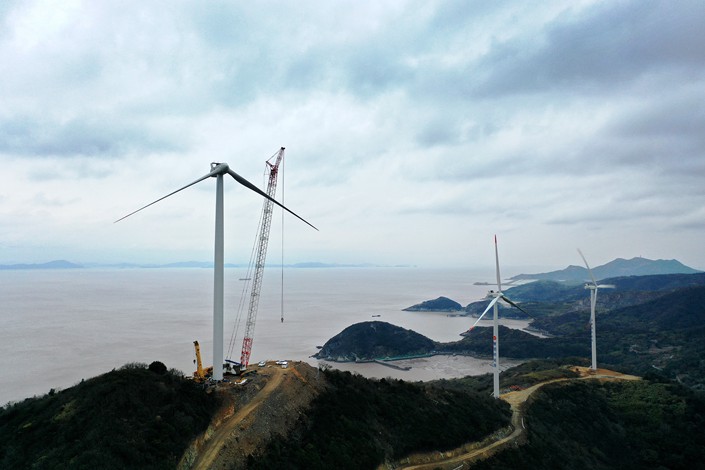 The world’s largest coal consumer plans to scale up renewable energy use in the coming decade as part of ambitious pledges to bring its carbon dioxide emissions to a peak by the end of the decade. Photo: VCG

China could have the capacity to generate more electricity from non-fossil fuel sources than from burning coal by the end of this year, a major trade group has said, as the Asian nation’s bold climate pledges drive a flood of investment into clean energy.

The world’s largest greenhouse gas emitter is expected to have installed about 1,120 gigawatts (GW) of generation capacity based on non-fossil fuels — such as hydropower as well as wind and solar power — by the end of 2021, according to a report published Friday by the China Electricity Council (CEC).

By comparison, the nation had installed 1,090 GW of coal-fired power as of March, the report says. The figure is not expected to grow significantly during the rest of the year.

China’s non-fossil energy capacity grew by about 3% year-on-year during the first quarter as domestic energy companies threw themselves into building renewable power installations to align themselves with the country’s bold carbon emissions pledges, a trend that looks set to continue, a CEC staffer told Caixin.

Some 91% of all new investment in China’s power generation sector in the three months through March went into non-fossil energy sources, according to the report (link in Chinese).

Overall investment hit 79.5 billion yuan ($12.25 billion), representing a year-on-year rise of 31.3%, albeit from the low base caused by last year’s pandemic-induced economic shutdowns.

Wind installations accounted for 41% of new funding, according to a Caixin calculation based on separate figures (link in Chinese) from the National Energy Administration. By contrast, investment in thermal energy installations, which include coal, oil and natural gas, made up just 10% of the total.

Hydropower commanded the biggest year-on-year investment increase of any power source in the first quarter, soaring 76.1% as developers dialed up the construction of more so-called pumped hydro projects, a key method of storing energy, the CEC source said.

Although China now has the capacity to generate roughly the same amount of electricity from both fossil and non-fossil fuel sources, some 64% of its power still comes from coal, the CEC report says.

That is partly because the black rock — and other fossil fuels like natural gas — provide more reliable power than weather-dependent alternatives like wind and solar, allowing energy firms to respond more flexibly to spikes in demand.

Hydropower is China’s largest source of non-carbon-based energy, accounting for just under one-fifth of the country’s total generation capacity. Solar and wind both each make up around one-tenth.

The world’s largest coal consumer plans to scale up renewable energy use in the coming decade as part of ambitious pledges to bring its carbon dioxide emissions to a peak by the end of the decade and reduce them to net zero by 2060.