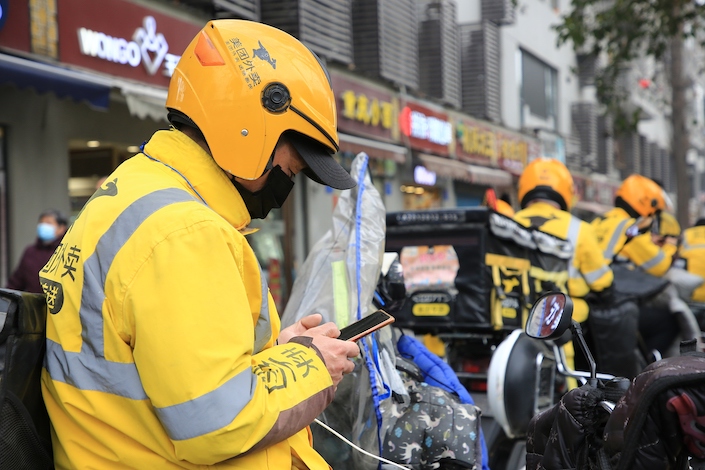 The State Administration for Market Regulation (SAMR) reported the investigation Monday, looking into alleged misconduct including a practice known as “picking sides,” in which a company forces merchants to work exclusively with it and shun competitors, according to a statement. Meituan’s Hong Kong-traded shares closed the day 0.46% lower.

Meituan said it will actively cooperate with the investigation and step up efforts to comply with regulations. The company’s business operations remain normal, it said.

The SAMR fined Alibaba a record 18.2 billion yuan ($2.8 billion) earlier this month for violations of antitrust laws, marking a seismic moment in the government’s quest to rein in monopolistic behavior by online platforms. The fine resulted from a four-month investigation that concluded the e-commerce titan unfairly squeezed out competition among online retail platforms by forcing vendors to choose between its services and those of rivals.

Three days after the Alibaba fine, China’s market regulator along with cyberspace and tax regulators summoned the country’s biggest tech companies — including Meituan — and warned them of “severe punishment” if they continue to break antitrust rules after a one-month grace period. Meituan pledged after the meeting to “consciously maintain market order” and said it “won’t force merchants to ‘pick one of two’ through unreasonable means.”

Picking sides is a common tactic used in business competition among internet companies and a focal point of regulators’ antitrust supervision. Delivery platforms often use the strategy to consolidate their market status in regions where they have an advantage, said one person close to Alibaba-backed Ele.me, Meituan’s archrival.

Internet platforms use the picking-sides tactic because of the so-called “winner-take-all” business model. Once two or three players reach leading positions in the market, the platforms benefit from a “winner effect.” If they can’t force vendors to pick sides, platforms like Alibaba may lose the winner effect.

In April 2020, Guangdong Catering Service Association publicly criticized Meituan for violating the Antitrust Law by forcing local restaurants to pick sides amid heated food-delivery competition during the pandemic lockdown. Meituan threatened to remove restaurants from its platform if they didn’t work with it exclusively, according to the association.

Meituan later said it reached a settlement with restaurants in Guangdong without giving details. A Guangdong restaurant owner told Caixin that he had to work with Meituan as the platform generates many more orders than rival platforms including Ele.me.

Several market experts said that compared with Alibaba’s countrywide e-commerce business, antitrust supervision of food delivery platforms is easier as most of the business can be clearly defined by regions.

The penalty on Alibaba’s picking-sides tactic serves as a signal that China’s antitrust crackdown on internet platforms’ monopolistic practices is gaining steam, one person close to the SAMR said.

It’s not realistic to expect that administrative punishments can completely eliminate the picking-sides practice, but such behaviors will be greatly limited and the operating costs of merchants will be reduced, said Li Mingtao, president of the Institute of China International Electronic Commerce Center under the Ministry of Commerce.