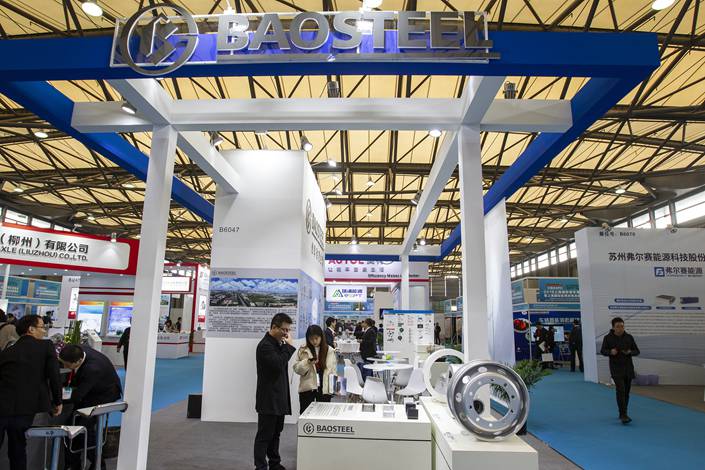 Baosteel attributed its latest jump in profit to a strengthening domestic economy and high prices for crude steel. Photo: VCG

The main listed subsidiary of the world’s largest steelmaker said Tuesday its net profit soared by nearly two and a half times in the first quarter, as rising prices for the metal continue to swell the coffers of Chinese mills.

Baoshan Iron & Steel Co. Ltd. (600019.SH), also known as Baosteel, posted net gains of 5.36 billion yuan ($826 million), the company said in a filing (link in Chinese) to the Shanghai Stock Exchange. The figure represents a 248% rise on the equivalent period last year, which offered a low comparison base as China’s Covid-19 outbreak caused a collapse in production.

Profits were up 97% compared with the first quarter of 2019, before the pandemic began, according to a Caixin calculation based on a previous Baosteel filing (link in Chinese).

Baosteel attributed the latest sharp rise in profits to a strengthening domestic economy and high prices for crude steel, which have surged amid a seasonal rise in demand and the central government’s decision to curb production in line with emissions targets.

China’s steel price index stood at 136.28 at the end of March, up 37.4% on the previous year, according to the China Iron and Steel Association (CISA), a government-backed industry group. The Asian nation churned out 271 million tons of crude steel in the first quarter, a 15.6% jump from a year earlier and 17.3% higher than the equivalent period (links in Chinese) of 2019, according to the National Bureau of Statistics and Caixin calculations.

Baosteel said it moved quickly in the three months through March to meet rising steel demand, with its large number of manufacturing bases and cooperative agreements helping to stabilize production and assure the quality of steel products.

Net profits for 2020 rose 0.9% to 12.68 billion yuan, the company said in a separate annual report (link in Chinese). That figure could exceed 20 billion yuan this year as government curbs on steel production boost demand for Baowu’s subsidiaries, according to an estimate by Soochow Securities, a brokerage headquartered in the eastern Chinese city of Suzhou.

China has sought to rein in steelmaking since last year to reduce carbon dioxide emissions, which Beijing plans to bring to a peak by the end of the decade and force to net zero by 2060.

The curbs are fueling high steel prices and boosting the profit margins of the country’s mills. In the first two months of this year, a group of 89 key steelmakers posted combined profits of 39.7 billion yuan, a rise of 160% on the equivalent figure from last year, the National Development and Reform Commission said earlier this month.

By comparison, large and midsized steel producers recorded combined profits of 216.4 billion yuan for the whole of 2020, a relatively modest increase of 6.3% on the year prior, according to CISA data.

Shanghai-headquartered Baosteel said it produced 12.27 million tons of crude steel in the first quarter, marking a year-on-year rise of 9.3%. It sold the metal at an average price of 5,194 yuan per ton, some 23.2% higher than in the first quarter last year.

Baosteel’s stock price fell by more than 4% during Tuesday trading before closing down 1.39% at 8.54 yuan.