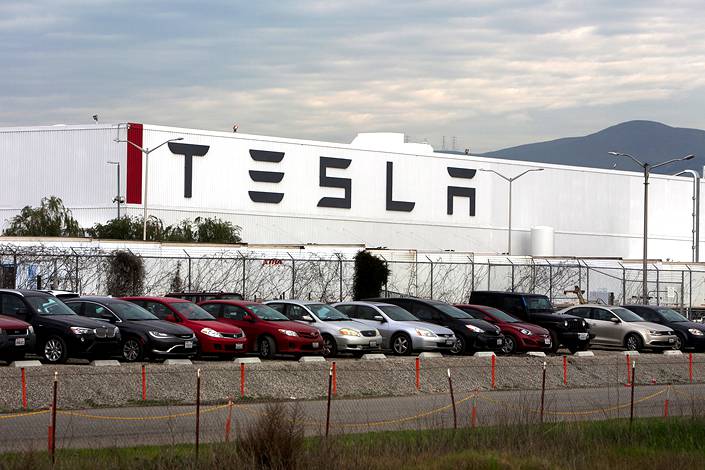 It came as the company faced headwinds from a global shortage of semiconductors and sought to weather a backlash in the key Chinese market over the handling of a protest at an auto show in Shanghai this month.

The Nasdaq-listed carmaker’s $438 million in first-quarter net profits were boosted by $101 million it made by selling 10% of its bitcoin holdings, in what founder Elon Musk said was an attempt to show the cryptocurrency is a good alternative to cash.

Also helping the firm stay in the black was $518 million in income from sales of regulatory credits to other carmakers so they can meet environmental rules, according to the unaudited earnings report. Tesla’s revenue from selling the credits was up 46% from a year earlier.

Overall revenue was $10.4 billion, a rise of 74% from the first quarter of last year, when the Covid-19 pandemic forced production shutdowns and decimated global trade.

Tesla said its healthy revenue growth was partly due to a record 185,000 electric vehicles it sold in the three months through March, which was more than double the number during the same period last year.

Revenue was up 129% on the first quarter of 2019, before the pandemic started. Net profit was 26 times higher than the first three months of last year and also marked a turnaround from a $702 million loss the company posted in the equivalent period of 2019.

Tesla’s latest earnings report shows the company purchased some $1.5 billion worth of “digital assets,” believed to be bitcoins, in the first quarter and resold a small portion of them.

Additionally, the U.S. automaker earned more than half a billion dollars by selling government electric-vehicle (EV) credits to other automakers with more-polluting portfolios. Since Tesla receives the credits for free and only makes EVs, it can sell the credits at 100% profit margins.

Strong demand in China for the Model Y SUV, which is produced at Tesla’s so-called “Gigafactory” in Shanghai, powered the company’s record quarterly sales.

Planned output expansion at the Shanghai hub is “progressing well,” the company said, adding that it expects quarterly production there to continue rising through the rest of the year.

Tesla’s average vehicle sales price declined by 13% year-on-year, the report said, partly due to its China-made products, which have lower sticker prices, contributing a greater share of total purchases.

Like many carmakers, Tesla is suffering from a global shortage of semiconductors that in some cases forced manufacturers to suspend production. The chip crunch remains a “huge problem,” Musk said during a Monday earnings call.

Tesla is also dealing with the fallout from an incident at the recent Shanghai auto show, when a protester climbed onto a Model 3 in the company’s booth and shouted “Tesla brakes fail.”

The automaker initially dismissed the protester’s claims, but later issued an apology following outrage on Chinese social media and criticisms of its behavior by the authorities.