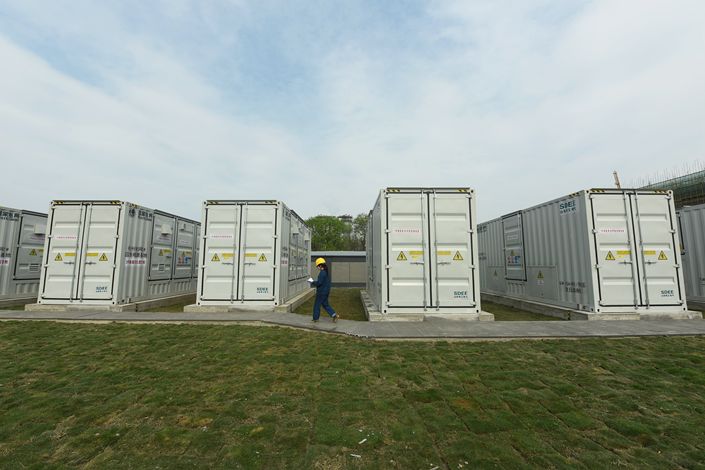 China would rapidly expand its energy storage sector over the next five years under a new draft plan. The proposals aim to use emerging technologies to add 35 gigawatts to China’s energy storage capacity by 2025. Read more about the promising news for the country’s battery manufacturers here.

The central bank pledged to incorporate climate change risks into its macroprudential policy framework. A carbon futures market is being mulled over.

On April 15, the PBOC and IMF co-hosted the High-Level Seminar on Green Finance and Climate Policy. PBOC Governor Yi Gang said that the central bank plans to launch tools supporting carbon emissions reduction and provide low-cost capital for carbon emissions reduction. The PBOC is exploring the systematic inclusion of climate change factors in its stress tests for financial institutions. It also plans to gradually incorporate climate change risks into its macroprudential policy framework. The PBOC has made quarterly assessments of financial institutions’ green credit and green bonds while encouraging them to self-evaluate and manage their environmental and climatic risks. It will also strengthen green finance support through commercial credit ratings, deposit insurance rates, collateral for open market operations and more.

By the end of 2020, China’s green loan balance had reached $1.8 trillion and its green bond stock $125 billion, making them the largest and second-largest in the world, respectively. More than 40 carbon-neutrality bonds have been recently issued, their total value exceeding $10 billion.

On April 16, a CSRC spokesperson introduced the commission’s concrete measures for green finance development. First, it actively backs green and low-carbon financing. During the 13th Five-Year Plan (FYP) period, green and low-carbon enterprises raised a total of 1.9 trillion yuan ($290 billion) through IPOs, refinancing, listing and others. Second, it supports M&A and reorganization in green and low-carbon industry. During the 13th FYP period, emerging industries including new energy, new materials, energy conservation and environment protection generated a total of 2.9 trillion yuan from M&A and reorganization. Third, it strengthens listed companies’ environmental information disclosure. In the 2019 annual report season, 1,452 listed companies disclosed their environmental information. Fourth, it guides securities, funds and financial institutions to serve green financing. Between 2016 and late February 2021, 96 green-themed public-raising funds had been issued, with a duration scale of 221.9 billion yuan. Fifth, it explores the construction of the carbon futures market and guides the steady and smooth operation of the Guangzhou Futures Exchange. Sixth, it formulates and improves relevant international standards on green finance.

On April 14, the SEE officially launched its carbon neutrality index. The carbon neutrality index was designed with reference to mainstream carbon neutrality indexes and relevant concepts in the current market. The index sample includes a total of 190 listed enterprises engaged in energy conservation and environmental protection, new energy and other areas in the Share Transfer System (Exchange Board) and Science and Technology Innovation Board (New Four Board).

By April 14, the first batch of ESG ETFs had all received approval, including four products from AXA SPDB Investment Managers, Penghua Fund and Fullgoal Fund. As one of the strongest through lines in 2021, carbon neutrality has become a competitive factor in the A-share market. The first four ESG ETFs respectively track core indexes along this line — the CSI ESG 120 Strategy Index, CSI 300 ESG Benchmark Index and CNI ESG 300 Index. As of April 14, the market had a total of 135 ESG concept funds, more than 30% of which were issued after 2018. The average rate of return for ESG concept funds in the market over the past year reached 50.13%, 66.96% over the past two years and 69.63% over the past five years.

BOC Wealth Management raised funds to issue the first “peak carbon dioxide emissions” wealth management product on April 8 of this year. Taking equity assets as the main line of allocation, it will focus on exploring investment opportunities in leading industry segments such as energy conservation and emissions reduction, new energy, environmental protection and green consumption. According to Chinawealth, the product — named “(Peak Carbon Dioxide Emissions) BOC Wealth Management – Zhifu (Closed)” — has an annualized performance comparison benchmark of 4.75%; its risk level is 3; the product term is 760 days; the minimum purchase amount is 1,000 yuan. Fundraising was conducted from March 31 to April 7.

Chairman of the China-U.S. Green Fund Xu Lin believes that because China’s traditional fossil energy is heavily dependent on imports, the energy transformation toward carbon neutrality is of strategic significance to China. On April 11, the “Climate Economy and Future Investment Trends & Bill Gates’ New Book Sharing” was co-hosted by the Citic Press Group and other agencies. At the meeting, Xu reported that China is dependent on foreign countries for approximately 73% of its oil and more than 40% of its natural gas, and that both of these figures are rising. If China’s transportation industry can be fueled by green power or hydrogen instead, the reduction in carbon emissions would be immense, but beyond that, it would also reduce imports of oil and natural gas to significantly improve China’s energy security.

The green premium is the difference in cost between clean (zero carbon emission) energy and fossil energy for a certain economic activity. A negative green premium indicates that the cost of fossil energy is higher than that of clean energy (zero emission) — an incentive to switch to clean energy and reduce carbon emissions. Green premiums are highly structural and vary significantly across industries due to differences in technologies, business models and public policies. A study by CICC suggests that market prices are unable to provide sufficient incentives for a switch to clean energy in the eight industries, which collectively account for as much as 88% of total carbon emissions in China.