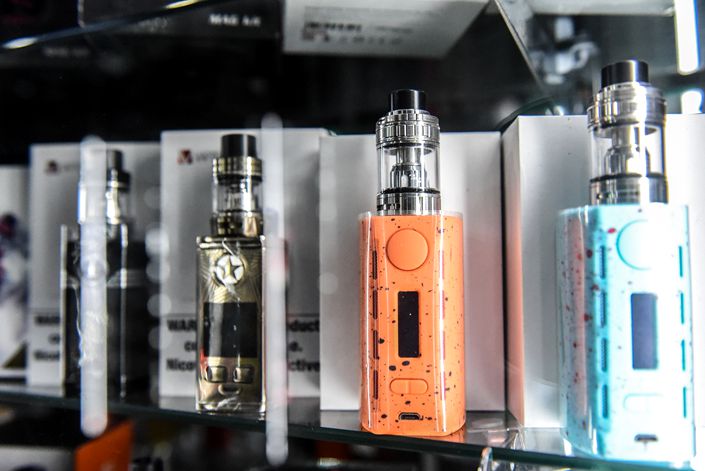 For tobacco control advocates, the STMA’s lack of interest in public health measures is the problem. Copying its model wholesale for e-cigarettes could expose more people to a growing list of suspected harms that include hooking minors on nicotine. Photo: VCG

Public health advocates and e-cigarette makers don’t agree on much.

But outspoken figures in both camps say China’s powerful State Tobacco Monopoly Administration (STMA) — which is in the enviable position of both regulating and effectively selling almost all of China’s tobacco products— should not also be given the power to regulate vapes.

That’s in the cards after the Ministry of Industry and Information Technology (MIIT), which oversees the STMA, stopped soliciting opinions in April on a draft plan to do precisely that, which would end the booming market’s regulatory free-for-all.

For vape-makers, the fear is the tobacco monopoly bureau will bind them in costly red tape, hike taxes and stifle the industry — perhaps while promoting the state-owned giant China National Tobacco Corp.’s forthcoming brands of “heat-not-burn” cigarette alternatives. In the worst-case scenario, it could effectively nationalize their firms.

For tobacco control advocates, the STMA’s lack of interest in public health measures intended to curb the harms of smoking is the problem. Copying its model wholesale for e-cigarettes could expose more people to a growing list of suspected harms that include hooking minors on nicotine.

Those concerns came to a head in an 11th hour submission by the Beijing Tobacco Control Association (BTCA), which criticized government plans to add a line to implementation guidelines for China’s Tobacco Monopoly Law that brought e-cigarettes into the legislation.

That long-standing law gives the STMA power over the entire tobacco industry supply chain, from growing the broad-leaved herbaceous plants that become leaf tobacco, through to the production, sale, import and export of cigarettes through a complex licensing system.

The BTCA said the STMA had historically failed to protect people from the harmful effects of traditional cigarettes, and was “essentially performing the corporate functions of a tobacco corporation.”

In China, stakeholder submissions on proposed changes to a law are not routinely made public, so it was notable that the BTCA chose to publish the paper on its own website on April 20. The high-profile group was founded in 1987 as the Beijing Smoking and Health Association by tobacco control pioneer Dr. Weng Xin Zhi. Weng died in 2012 at the age of 93, 28 years after he published China’s first national adult smoking survey. He also led the drafting of China’s first tobacco control law in 1987, according to an obituary published in the BMJ.

Then as now, powerful forces benefited from China’s titanic tobacco industry, which generates hundreds of billions of yuan for Beijing each year. The nation remains the world’s largest consumer and producer of cigarettes, some 18 years after it signed the World Health Organization’s (WHO) Framework Convention on Tobacco Control. China has no national indoor smoking ban, cigarettes are still relatively cheap, and tobacco-related disease kills 1 million people each year, according to the WHO.

Giving the bureau authority over e-cigarettes just means the tobacco industry will gain even more power and be harder to rein in. It will become the group’s responsibility to squeeze fatter profits from e-cigarettes, the submission says, comparing it to “putting the fox in charge of the hen house.”

“Only when the tobacco monopoly system is separated into (separate) business and a regulator parts, will the tobacco bureau then seriously undertake its tobacco control responsibilities … only then can we discuss the question of them overseeing e-cigarettes too.”

Oversight of e-cigarettes should instead go to China’s National Medical Products Administration and the State Administrator for Market Regulation, the group said. Flavoring agents that can make the devices attractive to young people should be restricted or banned, ingredients and nicotine doses strictly regulated, and clear health warnings should be printed on packaging in the same way as with conventional cigarettes.

Protecting minors has been at the center of concerns about China’s flourishing e-cigarette industry, which benefited from a hands-off approach by market regulators until two rounds of regulation in November 2019 and July 2020. The first was on sales to minors, while the second was a blitz on “covert online sales” of vapes.

These safety concerns follow similar worries about the products in other jurisdictions.

Invented by Shenyang-born pharmacist Hon Lik in 2003 as a smoking cessation aid e-cigarettes consist of a battery, an atomizer and a cartridge holding nicotine-infused liquid or “vape juice.” The devices allow users to inhale the highly addictive neurotoxin rather than smoking it, thus avoiding inhaling tar and other byproducts of burning cigarettes.

But the devices bring their own safety concerns, with early evidence suggesting they increase the risk of heart disease, stroke and lung disease, and may be linked to seizures, particularly in young people.

A 27-Chinese-character legislative amendment was all it took to slice the share price of recently-listed RLX in half. That was the length of the one-line proposed amendment announced by the MIIT on March 22, saying e-cigarettes and other new types of tobacco products would be regulated “in reference” to the rules for cigarettes.

Investors read the news as evidence of a looming regulatory crackdown on an industry that has long benefited from a soft touch. But there was no detail on what it would mean for licensing and taxation, leaving many scratching their heads.

“Only one thing is clear now,” an executive at a smaller e-cigarette firm told Caixin at the time. “E-cigarettes will be under the control of the STMA in the future.”

The goals of China’s Tobacco Monopoly Law, as stated in its first article, are to ensure the tobacco industry is managed in an organized way, to “improve the quality” of tobacco products, and to safeguard consumer interests — and national revenue.

The last point is not lost on control advocates, who say the administration’s incentives do not align with what has been exhaustively shown to be the severe health impacts of smoking. The tobacco industry is one of the Chinese government’s most important single sources of revenue, with regular cigarettes contributing 1.2 trillion yuan to state coffers in profits and tax last year alone.

E-cigarettes currently attract a value-added tax of 13% in China, in line with other ordinary consumer goods. Regular cigarettes are subject to a litany of different taxes and levies that that can add up to between 55% and 80%. Many in the industry expect that under the changes, vapes are in line for similar treatment.

Children without a mother

Regulation was expected, but interviews with e-cigarette company insiders suggest that the March 22 proposal caught them off guard.

“We only heard about this when you did. The rules haven’t been released,” one e-cigarette brand CEO told Caixin that evening. “Nobody knows which direction they’ll go in.”

“What everyone fears most is monopolization (by China Tobacco),” said the person, who Caixin chose not to name so they could speak candidly. They said they were worried that because cigarettes and e-cigarettes compete for a similar market, their products will be subsumed into the monopoly system and ultimately suppressed in favor of conventional cigarettes.

Others in the industry say that outlook is too pessimistic, and believe the monopoly administration will instead raise barriers to market entry and issue licenses for companies to produce, wholesale and retail e-cigarettes.

One vaping executive told Caixin that the lack of clarity on who regulates their products has caused issues for the company. “We were like children without a mother. I didn’t know who was in charge. Was it the monopoly bureau? The national health commission? The market regulator?”

A source with knowledge of China Tobacco’s workings told Caixin the mood within the company was that e-cigarettes must be monopolized in order to set a ceiling on their profits and sales. But this could also be done by restricting upstream raw materials — the nicotine in e-cigarettes often comes from tobacco leaf waste, they said.

Others still say the regulatory direction is more likely to be about quality and sales — setting standards for the quantity of nicotine and additives in e-cigarettes, for instance, and controlling sales to minors. That’s the view of Jiang Yuan, vice president of the Chinese Association on Tobacco Control, who says a big tax grab is unlikely to be the goal — her surveys suggest relatively few people in China use e-cigarettes, while about a quarter of the country smokes cigarettes.

Some in the e-cigarette industry have privately criticized the fact that like other global tobacco giants, China Tobacco is developing its own cigarette alternatives, including so-called “heat-not-burn” hybrids which are electronic devices that contain tobacco leaves. While these have not yet hit the market in China, these could make the state giant both player and referee.

It’s now up to China’s State Council to decide whether to approve the amendment. No timeline has been released.