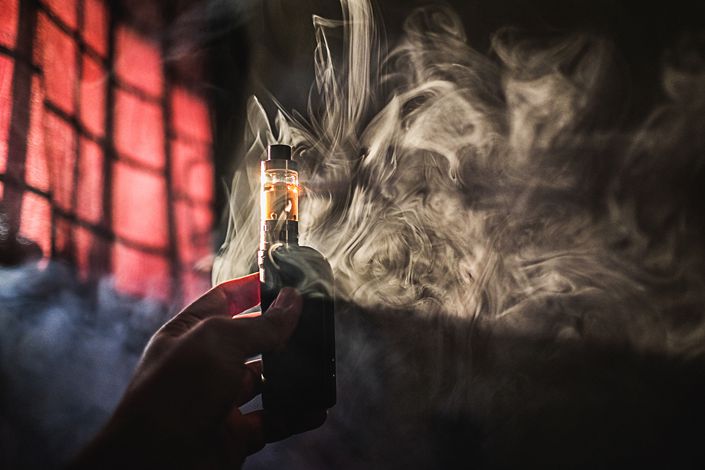 Chinese authorities on Monday published draft amendments to the Tobacco Monopoly Law that would extend its jurisdiction to e-cigarettes. Photo: VCG

Investors in China’s two largest e-cigarette companies ran for the exits after Beijing signaled the controversial products will be treated more like tobacco cigarettes.

Shares of China’s biggest vaping company, RLX Technology Inc., dove almost 48% on Monday. The firm, which raised $1.4 billion with a New York Stock Exchange listing two months ago, does most of its business on the Chinese mainland.

Meanwhile shares of the more internationally focused Smoore International Holdings Ltd. were down more than 27% on Tuesday in Hong Kong.

On Monday, the State Tobacco Monopoly Administration (STMA), and the Ministry of Industry and Information Technology (MIIT), published draft amendments to the Tobacco Monopoly Law which would extend the law’s jurisdiction to e-cigarettes.

Ao Weinuo, who leads the Electronic Cigarette Industry Committee, a vaping industry group, told Caixin said the draft made clear that e-cigarettes would be placed under the regulatory control of the STMA, which both sells and regulates tobacco. It also clarified that they will be treated as tobacco products, rather than electronic devices, in a development closely watched by the industry.

But the draft amendment has landed in an information vacuum, prompting speculation about how the burgeoning domestic e-cigarette industry might actually be affected. The revenue of China’s e-cigarette market has been growing at an average annual rate of 30% since 2016.

Devil in the detail

The one-line amendment (link in Chinese) only says that e-cigarettes and other new types of tobacco products will be regulated “in reference” to the rules for cigarettes.

Investors read the news as evidence of a looming regulatory crackdown on an industry that has long benefited from a soft touch. But industry insiders said the scant detail left key questions hanging, like how it would impact licensing and taxation.

An executive at a smaller e-cigarette firm speculated that companies could become suppliers to the near-monopoly state-owned enterprise China Tobacco Group, which shares staff and offices with the STMA. Under such a model, China Tobacco Group might take over distribution and e-cigarette companies would need to apply for licenses to produce and sell vapes to it, the person said. That would put e-cigarettes in a similar position to tobacco-product makers, who need to obtain a license from the STMA to produce, distribute or sell their wares.

It was also possible that regulators would seek to standardize e-cigarette additives in the way they do with the main additives in cigarettes and cigars.

Also unclear was whether the new regulations would impact how the government taxes e-cigarettes, which currently face a 13% value-added tax. Regular cigarettes are subject to a litany of different taxes and levies which add up to around 80%. The tobacco industry is a lucrative revenue source for the Chinese government, and regular cigarettes contributed 1.2 trillion yuan to state coffers in profits and tax last year.

“Only one thing is clear now,” the executive said. “E-cigarettes will be under the control of the STMA in the future.”

Ao stressed that the provision had used the words “in reference to” (参照) rather than “in accordance with” (按照), suggesting China’s vaping lobby is optimistic about its room to maneuver. He said his group would collect feedback from member companies and provide it to the MIIT. The deadline for public feedback is April 22.

An accompanying memorandum on the draft amendment says the change is intended to resolve new issues created by a lack of e-cigarette regulation, clarify the legal basis for supervision, overcome quality and safety risks, protect minors, and bring regulation in line with that in other major countries and regions.

In Depth: China’s Booming $5 Billion E-Cigarette Industry at a Crossroads

RLX Technology, which is backed by Sequoia Capital China and is known for its Relx-branded vapes, was a key beneficiary of the last big e-cigarette clampdown that came in the form of a blanket ban on online sales and advertising in November 2019. Beijing ordered manufacturers and sellers to shut down their retail websites and mobile apps and to withdraw online e-cigarette ads.

Industry insiders said RLX was likely to be much harder hit by the latest changes than Smoore, which counts the U.S. as its main market and sells more than 80% of its products overseas.

For tobacco control advocates, e-cigarette regulations that follow those governing the rest of China’s tobacco industry will still be a soft touch.

Despite signing the World Health Organization’s (WHO) Framework Convention on Tobacco Control in 2003, China has no national indoor smoking ban, cigarettes are still relatively cheap, and tobacco-related disease kills 1 million people each year, according to the WHO.

“China is therefore wise to try to contain a second type of tobacco epidemic of e-cigarettes before they take too strong a hold,” said Judith Mackay, director of the Asian Consultancy on Tobacco Control.

“There needs to be regulation, if not banning, of these products,” Mackay said, adding that attempts to regulate the industry “need to be applauded.”

“But I’m somewhat baffled as to why the tobacco industry in China is starting to take measures against e-cigarettes when it has so many more important measures to take against conventional and traditional cigarettes.”

China has nearly 300 million smokers, and with e-cigarette firms often marketing their products as smoking cessation aids which decrease the intake of substances like tar caused by tobacco burning, it represents a lucrative potential market.

The “harm reduction” claim is unsupported by strong evidence, and public health experts have pointed out that it jars with efforts to market the products with enticing flavors and gimmicks to young people, and general uptake by nonsmokers. Researchers at the National University of Singapore reported the use of e-cigarettes resembling smart watches being used by school children in Malaysia, and the use of influencers and local celebrities to promote their use by young people throughout the region.

Potential long-term health impacts of e-cigarettes remain unclear, but multiple studies have linked them to cardiovascular and respiratory disease, and they have been banned in more than 40 countries.

An executive at a large institutional investor that decided against investing in RLX told Caixin: “Regulatory risk has always been the ceiling of the e-cigarette business. E-cigarettes will indeed drive new people to consume tobacco. That’s the business — it’s also the risk.”