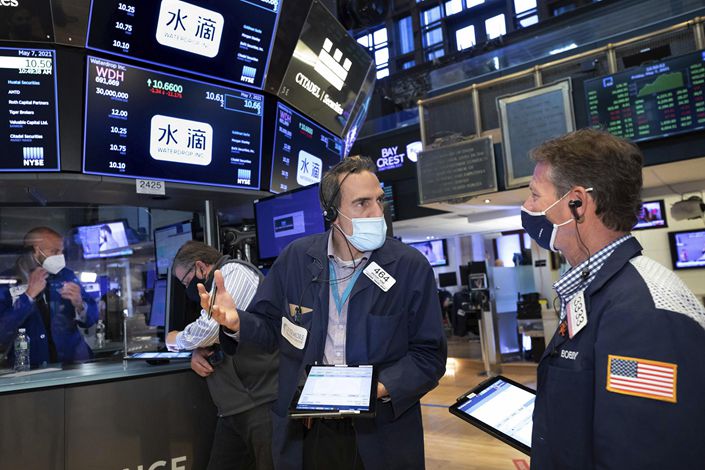 Caught short by a domestic regulatory crackdown this year on fintech firms, Chinese online insurance brokerage Waterdrop’s effort to mount a U.S. IPO suffered a setback on Friday as its shares tumbled 19.2% during their New York Stock Exchange debut.

The American depositary shares of Waterdrop Inc., which is backed by internet giant Tencent Holdings Ltd., had been priced at $12 apiece in the IPO, thus raising $360 million through the sale. The shares closed at $9.70 on Friday.

Starting 2016, Beijing-based Waterdrop operates an online platform to distribute insurance products along with a medical crowdfunding platform. The company is tackling a Chinese online life and health insurance market where premiums are expected to more than triple to 592 billion yuan ($92.3 billion) over five years up to 2024, according to research firm iResearch Consulting Group.

Waterdrop’s annual revenue grew more than tenfold to 3 billion yuan in 2020 from around 238 million yuan in 2018, according to its prospectus filed with the U.S. Securities and Exchange Commission. The vast majority of its revenue — 89.1% in 2020 — comes from commission fees generated from distributing insurance companies’ products on its platform.

But despite its rapid sales growth, the company has been losing money since its founding. Net losses more than tripled from 209.2 million yuan in 2018 to 663.9 million yuan in 2020, the prospectus showed. The biggest factor contributing to the losses was high operating costs tied to sales and marketing expenses of about 2.1 billion yuan, mainly for acquiring users and promoting its brand.

Waterdrop’s co-founder Yang Guang said in an interview with media on Friday that since the company remains in a rapid growth stage, it makes sense to continue to focus more on the speed and quality of its business development than on profits for the time being. The company will plow more money into user acquisition and business expansion in the next few years, Yang said.

In March, Waterdrop shut down one of its former main businesses, an online healthcare mutual aid platform, which provided users with a shared basic health plan covering various types of critical illnesses. The move followed regulators’ criticism (link in Chinese) that healthcare mutual aid platforms are essentially commercial insurance providers doing business outside supervision, and, as such, need to be fully licensed to operate.

In recent years, more and more of Waterdrop’s insurance customers have come from third-party referral channels, searches, and repeat purchases, accounting for a combined 83.4% of its traffic in 2020, rather than from its once popular mutual aid and medical crowdfunding platforms which had been early drivers of its insurance business.

The company also highlighted its dependence on Tencent, operator of China’s ubiquitous social media platform WeChat. If its ties with Tencent were to break down, that “could have a material adverse effect on our business and prospects for growth,” it cautioned in the IPO filing.

China’s insurance watchdog rolled out regulatory measures (link in Chinese) on the internet insurance industry effective on Feb. 1 that could reduce Waterdrop’s attraction to consumers.