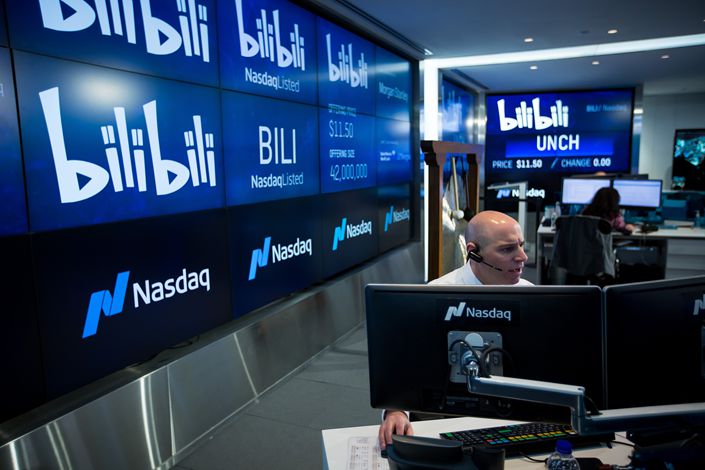 Hong Kong-listed shares of video streaming site Bilibili (BILI: NASDAQ / 9626.HK) slumped as much as 7.5% on news its losses blew out by more than two-thirds in the first quarter even as revenues soared, after the company spent aggressively on marketing to grow its user base.

Bilibili said its revenue was 3.9 billion yuan ($595.4 million), a 68% increase compared with the same period last year, but that its net losses grew by a similar margin to 903 million yuan, according to an unaudited earnings statement posted Thursday.

The market appeared to take no relief in the fact the youth-focused streaming site's earnings beat the expectations of Yahoo Finance analysts, and that the firm counted 223 million monthly active users, an increase of 30% over the same period a year ago. That was slower growth than last quarter, and only about 20 million of those were paying for the privilege, up by about half from last year. About 60 million users returned to the platform daily, an increase of 18%.

Shares of the company fell to an intraday nadir of HK$696, the lowest level since its homecoming listing six weeks ago, before trimming losses to close the week 6.25% down at HK$705.5.

Bilibili has been investing heavily in order to grow its user base, with sales and marketing expenses totaling nearly 1 billion yuan, up 65% year-on-year, including that on its advertising platform Sparkle, which paid out cash incentives to 375,000 users in the first quarter.

“Riding the massive wave of videolization, we aim to further grow our mindshare among the Gen Z+ demographic as the premium destination for video-based content,” said Bilibili chairman and CEO Rui Chen in a statement.

Advertising and e-commerce are Bilibili’s fastest growing businesses, with advertising revenue in the first quarter up 234% year-on-year to 715 million yuan. The top three advertiser categories were games, consumer electronics and food and beverage.

Bilibili’s e-commerce segment brought in 519.2 million yuan in revenue, a 230% increase, it said.

Far more sluggish was the growth of the firm’s lucrative gaming business, which brought in 1.107 billion yuan， but only grew 2% year-on-year, a new low. Gaming once contributed about half of Bilibili’s revenue, but the share has gradually declined to settle at about 28% this quarter.

Chairman and CEO Rui Chen told the earnings call Thursday that gaming was still one of Bilibili’s most important businesses. The firm has announced a string of investments in recent months, including in Shenzhen-based mobile game developer CMGE TEchnology Group, and was also understood to be in talks last month to buy a large stake in Yoozoo Games Co. Ltd.

Bilibili started life as a site where users would mostly share anime content and discuss it live. It is considered China’s most successful pioneer of live commenting, a function that pegs audience comments on videos to the point where they are made, popping up when other users reach that time stamp.

The earnings come after Bilibili's secondary listing fell flat in Hong Kong at the end of March, with shares falling as much as 5% on the day of its debut.

Nasdaq-listed shares of Bilibili plunged as much as 15.3% on Thursday in the U.S. before clawing back some of those losses after lunch and in pre-market trading. It was trading around 90 cents per share early Friday morning, down from an opening price of almost $1 on Thursday.