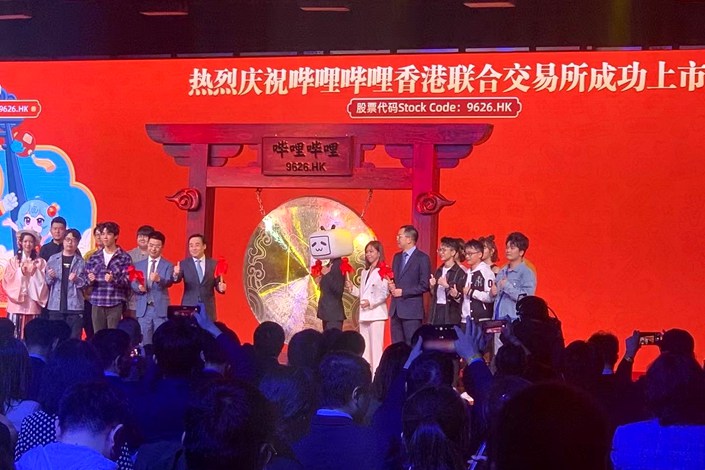 Video sharing platform Bilibili saw its shares fall as much as 5% in its homecoming debut Monday on the Hong Kong Stock Exchange, making it the latest in a string of U.S.-listed Chinese tech stocks to suffer stock price declines as they seek secondary stock listings closer to home.

The listing makes Bilibili the latest in a growing cohort of New York-listed Chinese companies tapping investor interests closer to home, driven by the deteriorating relations between Beijing and Washington that have led to tightened accounting scrutiny of Chinese firms on Wall Street.

“Now we have returned to a capital market that belongs to China,” Chen Rui, the company CEO, said at the debut ceremony, “as I believe video-streaming is an inevitable trend, and video will be the main content online.”

Last week, the U.S. Securities and Exchange Commission said it was moving ahead to force accounting firms to allow U.S. financial regulators to review the audits of overseas companies under the Holding Foreign Companies Accountable Act, which was passed by Congress and signed into law under U.S. President Donald Trump and is set to go into effect in 30 days, on April 23.

The penalty for noncompliance with the new rules is ejection from the New York Stock Exchange or Nasdaq for firms that fail to release their last three years of audited results to regulators.

Shares of several Chinese U.S.-listed companies seeking secondary listings in domestic markets have endured even sharper share price declines. As of the close of trading on Friday, Nasdaq-listed streaming platform iQIYI Inc. has seen its stock drop nearly 40% and Baidu Inc. shares have lost 20% since news of the SECs' enforcement plans was revealed last Wednesday.

It was hard to disentangle the impact of the SEC decision from the shockwave caused by a $20 billion wave of block trades in the U.S. Friday that rattled investors and particularly hit Chinese tech stocks.

China has long refused to allow the U.S. Public Company Accounting Oversight Board to examine the audits of firms whose shares trade in America, citing national security concerns. U.S. critics counter that such resistance risks expose investors to fraud and that it makes little sense that foreign firms can raise capital in U.S. markets without complying with American rules.

The ongoing tension over audits comes as the world’s two biggest economies continue to wrangle over issues ranging from security to trade and signals that Biden-era financial regulators intend to follow through on their predecessors' tougher stance on Chinese stock listings.

In addition to requiring companies to allow U.S. regulators to review company financial audits, the law requires firms to disclose whether they operate under foreign government control. The SEC’s announcement kick-starts that process by seeking public comment on the type of disclosures and documentation that firms will have to release.

Bilibili's CEO said the company is closely watching and studying possible effects of the act but that he is not concerned by the share price decline in Hong Kong and is positive about its long-term prospects. Bilibili is a video sharing site popular with Chinese gamers that boasts more than 200 million active monthly users that recently reported 77% annual revenue growth over the course of 2020. The company was founded in 2009 and went public on Nasdaq in 2018.

“Last week publicly-traded Chinese companies recorded the biggest decline in shares in the past five years,” he said.

“In light of such a black-swan event, it is already a success to complete a successful listing,” he added.

The Shanghai-based company, whose video streaming service is defined by a real-time captioning system that displays user comments as scrolling subtitles overlaid on the video playback screen, said it plans to use half of the IPO proceeds to invest in producing higher quality video programming. The funds will also go toward research and development into new technologies and features and for general corporate use and sales and marketing activities.