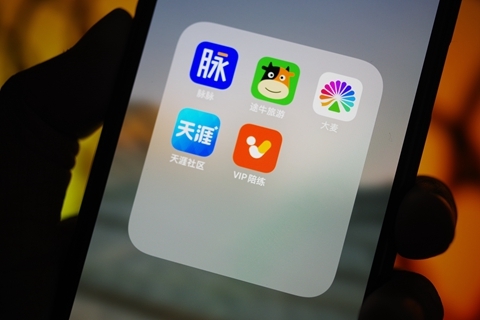 In the first seven months of last year, more than 8,000 apps and 478 companies were penalized by regulators for violating data collection rules

The Ministry of Industry and Information Technology (MIIT) ordered the apps, including popular online community Tianya Club, U.S.-listed travel agency Tuniu Corp. and LinkedIn-like career platform Maimai, to be removed immediately. Companies operating the apps must rectify related issues before they can return to app stores for download, the ministry said.

Chinese regulators have stepped up scrutiny of tech companies’ handling of users’ data after a raft of high-profile breaches sparked public outcry over privacy protection. In the first seven months of last year, more than 8,000 apps and 478 companies were penalized by regulators for violating data collection rules, government records showed.

The apps were accused of collecting personal information not necessary for their services or using the data without consent. Some of the apps were blacklisted by the MIIT after an April inspection for privacy breaches but failed to correct their practices as required, the ministry said.

On April 23, the MIIT warned 93 apps to rectify their data collection practices to avoid removal from app stores.

Multiple regulators in March jointly issued new rules that clarified what categories of data can be considered necessary for apps and stipulated that apps should not deny users access to basic services if they refuse to share data beyond the designated categories. The rules cover 39 types of mobile apps including those that provide navigation, ride hailing, instant messaging, payment and lending services.

Shortly after the new rules took effect May 1, the Cyberspace Administration of China released a list of 33 apps — including popular Gaode Map, Baidu Map and Tencent Map — that it said were violating data rules. The administration granted the apps 10 working days to rectify the issues and report back to the administration.

Xiao Yaqing, chief of the MIIT, in March said the ministry ordered more than 100 offending apps to be pulled from app stores in previous months.

MIIT data shows that its app inspection platform automatically monitors some 80,000 apps monthly, looking for signs that they’re breaching user privacy. According to the ministry, more than 500,000 apps have been inspected by the platform, 1,571 of which were ordered to make adjustments.

App operators are likely to face tougher punishments for data abuse after the new Personal Information Protection Law is passed, analysts said. A draft of the law is being reviewed by the standing committee of the National People’s Congress, China’s top legislature.

A draft of the law unveiled in October proposed a maximum fine of 50 million yuan ($7.7 million) or the equivalent of as much as 5% of revenue from the previous year on operators that illegally handle personal information, among the toughest penalties in the world.