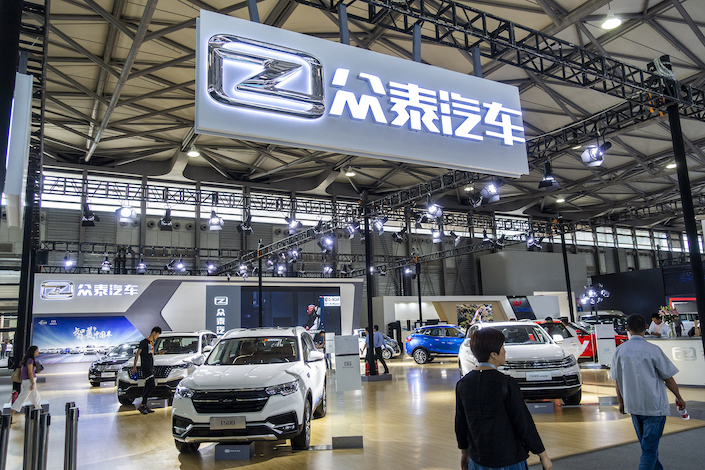 Zotye’s cars on display at Shanghai Auto Show in 2018.

Abnormal stock moves fueled by speculators involving a bankrupt Chinese electric-car maker scared away an investor that could have helped with the company’s restructuring.

Shanghai Zhiyang said the decision was based on findings from due diligence as well as recent abnormal fluctuations in Zotye’s stock price, which seriously deviated from fundamentals, Zotye said in a statement.

The once-ambitious automaker, which aimed to become the first Chinese car brand to enter the U.S. market, is on the cusp of being delisted from the Shenzhen Stock Exchange after posting losses of nearly 22 billion yuan ($3.4 billion) in the past two years.

To avoid being kicked off the exchange, Zotye started a bankruptcy restructuring in September, and in December it entered an agreement of intent with Shanghai Zhiyang.

Even though the company halted production and is continuing to lose money, its stock climbed by the daily price limit for 44 days since the beginning of this year, fueled by speculation. The stock price increased fivefold to 5.81 yuan.

The Shenzhen Stock Exchange issued several letters to the company requesting more information on its financial statements and its agreement with Shanghai Zhiyang.

The abnormal volatility in the company’s stock price may cause divergent expectations for the restructuring, increase its difficulty and even lead to a failure of the restructuring, Zotye said in its statement Wednesday. It warned that investors should be fully aware of the stock market risks and make prudent decisions.

The sharp rise in the stock attracted large number of individual investors. As of the end of April, Zotye had 64,000 shareholders, compared with only about 20,000 at the beginning of this year.

Zotye made global headlines in 2017 after being named Ford Motor Co.’s new-energy vehicle partner in China. The two companies planned to set up a 50-50 joint venture to produce electric cars. Ford said in February that it decided to end the planned venture, citing changes in China’s electric-vehicle industry and government policies.

That news came days after Zotye issued a 2020 earnings preannouncement, estimating a net loss of 6 billion yuan to 9 billion yuan for the year, following an 11.2 billion yuan loss in 2019. Last month, Zotye reported a wider-than-expected net loss pf 10.8 billion yuan for 2020. It produced only 1,371 cars last year, compared with 300,000 cars a year at its peak.