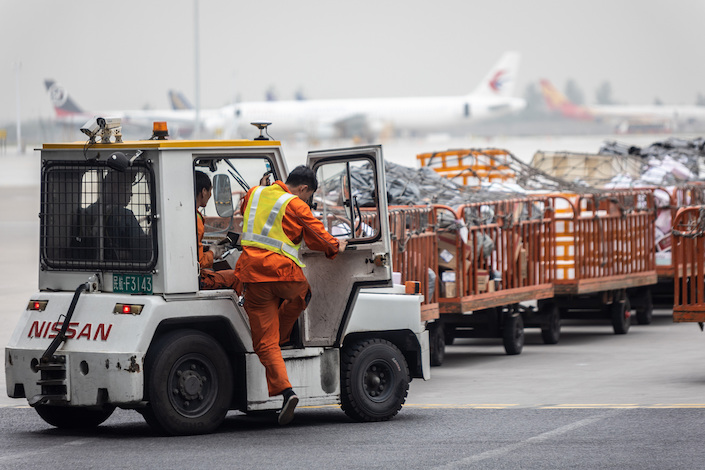 cargo flights departed from China to India between May 1 and 13, with 31 flights going the other direction.

At least two state-owned airlines reduced cargo flight schedules between China and India, citing increasing instability as the coronavirus surges in India, Caixin learned. The two carriers are applying to suspend flights in and out India, sources familiar with the matter said.

Several countries including the United States, Australia, the United Arab Emirates and Malaysia have issued bans on travelers from India, citing the severity of the pandemic.

“As the pandemic escalates in India, there are rising difficulties making contact with freight recipients and getting payments,” said one airline cargo department employee. Traders are also reducing freight orders due to stricter quarantine requirements on goods from India, the person said.

While Chinese airlines evaluate risks, fares for air cargo transport from China to India are surging because of rising demand for China-made medical supplies.

“The current fare for freight transport from China to India is about 70 yuan ($11) per kilogram, nearly double from a week ago,” said a person from logistics company Kuehne + Nagel International AG. Booking air cargo space has become increasingly difficult since April, “mainly due to demand for face masks and oxygen generators,” the person said.

China had exported 5,000 ventilators, 21,569 oxygen generators, 21.5 million face masks and 3,800 tons of medicines to India since April, Chinese Ambassador to India Sun Weidong said May 2 on Twitter, citing data from China’s General Administration of Customs. Chinese companies are speeding up production of an additional 40,000 ventilators that will be delivered to India, Sun said.

According to flight tracking platform VariFlight, 36 cargo flights departed from China to India between May 1 and 13, with 31 flights going the other direction. Logistics companies including SF Express, YTO Express and FedEx were the main operators of the flights.

In late April, the cargo unit of state-owned Sichuan Airlines said it would suspend services on six routes to India for 15 days because of the pandemic. The company said it was assessing its virus prevention measures and studying new plans to ensure the safety of flights.

The news spurred complaints from Indian media that such a move disrupts trade. China’s Foreign Ministry spokesperson Wang Wenbin at an April 26 routine briefing reiterated Beijing's support for India's fight against the pandemic.

“We stand ready to offer support and assistance to the best of our capability if the Indian side informs us of its specific needs,” Wang said.

The Indian government extended a suspension of scheduled international flights until May 31 because of the outbreak. The ban excludes cargo flights and certain chartered flights, according to the country's aviation authority. India halted international flights March 23, 2020. Passenger flights between China and India have remained suspended.

The World Health Organization said this week that the highly potent double mutant coronavirus variant from India, which is responsible for the country’s devastating outbreak, has been found in as many as 44 countries.