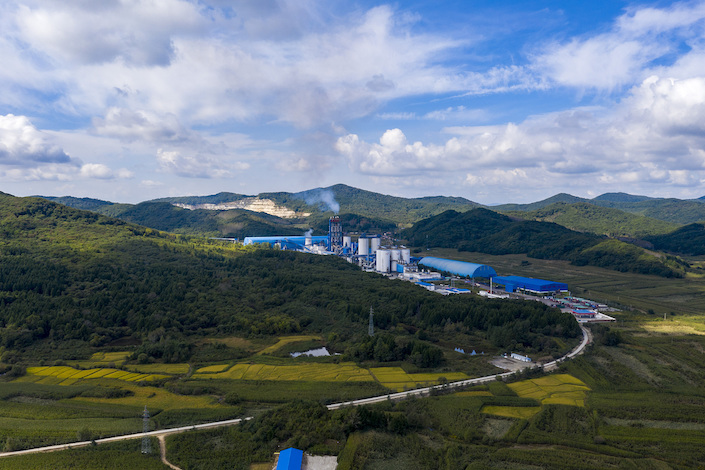 A court ordered Zangge Holdings Co. Ltd. (000408.SZ) to auction off its largest shareholder’s stake, resulting in a change of control, the Qinghai-based chemical and fertilizer producer said. The sale will involve a combined 36.76% of the company held by top shareholder Zangge Venture Capital Group and affiliated party Sichuan Yonghong Industrial Co. Ltd. Zangge Holdings has been embroiled in a financial reporting fraud scandal since last year.

China may include the building materials industry in the national carbon market, according to China Building Materials News. The Ministry of Ecology and Environment told the China Building Materials Federation to study key issues including quota allocation and measurement standards for building material sectors. The federation will also organize a test run of the carbon market for the industry and assess the operation of the market.

Jiangxi Ganfeng Lithium Co. Ltd. (002460.SZ) is assessing the feasibility of setting up a battery assembly plant in Argentina, the company said. Ganfeng Lithium signed a memorandum of understanding last week with the government of Jujuy province in Argentina and the Ministry of Productive Development of Argentina to invest in the Cauchari-Olaroz Project, one of the largest battery-grade brine lithium carbonate production projects in the world.

The Daishan No. 4 Offshore Wind Farm Grid Connection Project, located in the northern waters of Zhoushan, Zhejiang province, was successfully completed and put into operation May 16. The project supplies Yushan Island with green energy. The Daishan No. 4 project is part of Zhejiang’s largest offshore wind farm cluster. The project has 54 turbines with an installation capacity of 234 megawatts.

Hao Peng, director of the State-owned Assets Supervision and Administration Commission, pledged to push forward a three-year plan for restructuring state-owned enterprises (SOEs) and to ensure that more than 70% of the tasks are completed by the end of this year. Hao called for the acceleration of an overhaul of the shareholding structure and a business shakeup of SOEs, especially in Northeast China.

A Tesla inspection found that the braking system functioned normally in a crash Friday in an underground garage in Hangzhou, the electric car giant said Sunday on social media. A Tesla model 3 hit a wall in the garage, and the owner of the vehicle blamed brake malfunction. Tesla said its investigation found no abnormality in the braking system and said the garage floor was covered in water during a rainy day.

Baotou Iron and Steel Group Co. Ltd. (Baogang Group) set goals of reaching peak carbon dioxide emissions in 2023 and carbon neutrality in 2050. Baogang Group said it committed to the process of corporate transformation and upgrading with green development as the ultimate objective.

Battery maker Eve Energy Co. Ltd. (300014.SZ) denied a media report that it was in talks to become a supplier for global electric vehicle superstar Tesla Inc. Spurred by the report, the Shenzhen-listed stock rose 5.5% Monday, bring total gains to 18% gain since the close last Wednesday.

A transportation industry index issued by the China Academy of Transportation Sciences indicated strong recovery of freight and passenger transport in China. The April index reached 172.4 in April, up 31.1% year-on-year. The freight component at 196.3 was up 16% while the passenger index gained 101.3% from the same period a year ago.