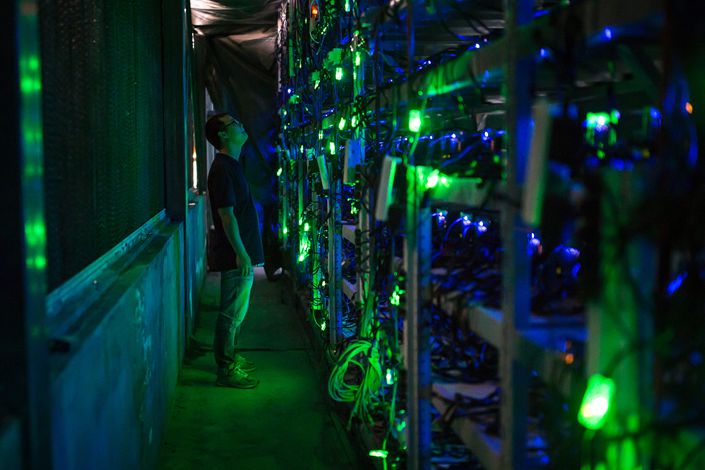 Inner Mongolian government has set up a platform for people to report cryptocurrency mining projects in order to close them. Photo: VCG

The cryptocurrency universe has been hit by two dollops of bad news this week as authorities in the world’s biggest Bitcoin mining nation intensified a crackdown on the digital asset.

The Inner Mongolia autonomous region, which recently started a campaign to stamp out cryptocurrency mining in a bid to cut carbon emissions, announced (link in Chinese) Tuesday it had set up a platform for residents to report on illegal projects. The same day, three financial self-regulatory bodies issued a joint notice (link in Chinese) banning financial institutions and payment companies from directly or indirectly providing cryptocurrency services to customers, including accepting the currency as payment. They also warned about the risks of speculating in cryptocurrencies and urged individuals to be wary of scams after police in Anhui province said they busted a digital currency pyramid scheme involving around 2,000 people and more than 200 million yuan ($31 million).

China has long taken a negative view of cryptocurrencies amid concerns over the potential risks to the domestic financial system posed by a surge in speculation. In 2013, financial regulators banned (link in Chinese) financial and payments institutions from conducting Bitcoin-related business, including accepting it as payment. In September, the People’s Bank of China (PBOC) banned initial coin offerings (ICO) and in February 2018, a PBOC-affiliated newspaper said (link in Chinese) the central bank would block access to domestic and foreign cryptocurrency exchanges.

While the financial authorities are worried about speculation, the government is also concerned about the impact of cryptocurrency mining on power consumption and the environment. China dominates the global Bitcoin mining network which consumed more electricity on an annualized basis than Argentina did in 2019, according to the Centre for Alternative Finance (CAF) at the University of Cambridge in the U.K. China’s energy consumption from Bitcoin mining in 2024 will exceed the total energy consumption of countries like Italy and carbon emissions will top the annual greenhouse gas emissions of Spain and the Netherlands, a study published last month by researchers in China, the U.S. and U.K. estimated.

China is the biggest consumer of computational power for mining Bitcoin, the dominant cryptocurrency. From September 2019 to April 2020, it accounted for an estimated 65% of the total global Bitcoin hashrate, according to data compiled by the CAF. The Inner Mongolia autonomous region, a coal-producing region in northern China with vast power generating capacity, was the country’s third-largest bitcoin mining area and accounted for an estimated 8.1% of the global hashrate, a gauge of the computing power used by the Bitcoin network measured by the number of calculations per second.

The local economic planning agency is encouraging people to submit information about any company or activity involved in cryptocurrency mining, including companies disguising themselves as data centers to benefit from preferential policies on tax, land and electricity prices, businesses that provide services to mines, and companies that obtain electricity illegally for the purposes of cryptocurrency mining, according to the Tuesday announcement from Inner Mongolia’s Development and Reform Commission.

The move builds on a February document from the local authority that vowed to shut all virtual currency mining projects in the region by the end of April in order to help meet a target of cutting energy consumption per unit of GDP by 3% this year.

The closures were among a slew of measures contained in the document aimed at ensuring the region achieves the energy intensity goals set out in its 14th Five-Year Plan that will guide its development through 2025. The document also banned the construction of new virtual currency mining projects.

The reporting platform is not only targeting projects that use coal power, but all cryptocurrency mining projects, a local official told Caixin.

Concerns have grown globally about the energy intensity of cryptocurrency mining. After publicly supporting Bitcoin and saying it would be accepted as payment for car purchases, Elon Musk, the founder of electric vehicle maker Tesla Inc., reversed course last week. He tweeted that Tesla had suspended purchases using the virtual currency due to concerns about the use of fossil fuels for Bitcoin mining and transactions. His about-turn sent Bitcoin prices slumping.

News of the crackdown by China’s financial regulators Tuesday sent cryptocurrency prices tumbling further, with Bitcoin trading at around $39,000 on Wednesday, down from around $43,000 on Tuesday and a peak of about $63,000 in mid-April.