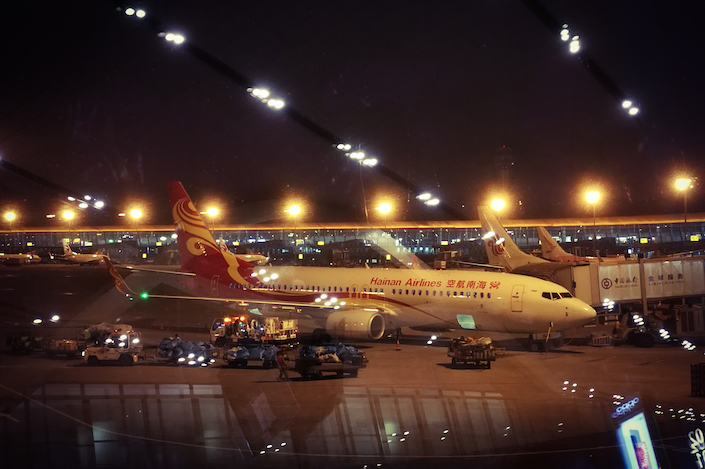 HNA is seeking strategic investors for its airline, airport and retail businesses as part of its bankruptcy restructuring

A unit of Chinese conglomerate Fosun International became the latest company to show interest in buying the aviation assets of HNA Group as the former highflyer continues dumping assets in its bankruptcy restructuring.

Yuyuan Tourist plans to invest 10 billion yuan in the new venture with the additional 30 billion yuan coming from other investors, the company said in a filing without elaborating on specific targets.

In late April, Shanghai-based Juneyao Airlines Co. Ltd. (603885.SH) announced a plan to set up a 30 billion yuan partnership for aviation investment. The Juneyao partnership may participate in acquiring airline assets from HNA, Caixin learned from a source familiar with the matter.

HNA is seeking strategic investors for its airline, airport and retail businesses as part of its bankruptcy restructuring. In March a court in Hainan approved including the giant conglomerate and 320 related companies in a single bankruptcy reorganization.

HNA’s flagship carrier Hainan Airlines had a market value of about 28.9 billion yuan as of Wednesday. The company faces debt claims amounting to 295.9 billion yuan, according to a creditors’ register. In 2020, Hainan Airlines reported a net loss of 64 billion yuan. Its stock has been slapped with a “special treatment” label, meaning it is in danger of being delisted.

Once one of China’s most prominent and prolific dealmakers, HNA attracted global attention for purchases including stakes in New York-listed hotel giant Hilton Worldwide Holdings Inc. and banking titan Deutsche Bank AG, which at one point caused its total assets to balloon to 1.2 trillion yuan ($184 billion).

But it all began to sink back to earth in 2017 as alarmed Chinese authorities began letting the air out of the conglomerates’ ballooning debt. HNA has been scrambling to unload assets for years in an unsuccessful effort to get out of its resulting liquidity crisis. The pandemic’s crippling effects on the company’s core airline and travel businesses proved too much to overcome, forcing a massive bankruptcy reorganization that will wipe out shareholders under a plan intended to repay creditors over the next five to eight years.