By Huang Rong and Luo Meihan 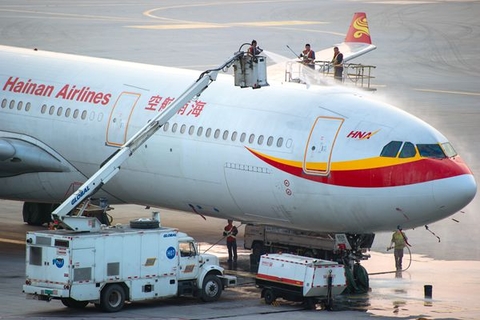 In January, Hainan Airlines said in an unaudited filing that it expects to report a net loss of up to 65 billion yuan for 2020, a would-be record for Chinese mainland-listed companies. Photo: VCG

The once high-flying Chinese conglomerate HNA Group Co. Ltd. is seeking strategic investors for its airline, airport and retail businesses after receiving court approval to include the giant and 320 of its related companies in a single bankruptcy restructuring case.

HNA’s decision, made public Friday in three separate announcements by its restructuring team, offers a glimpse at which parts of the conglomerate’s sprawling business empire might survive restructuring as the company attempts to crawl out from under the heap of debt it amassed during a global buying binge. Once one of China’s most prominent and prolific dealmakers, HNA attracted attention for purchases including stakes in New York-listed hotel giant Hilton Worldwide Holdings Inc. and banking titan Deutsche Bank AG, which at one point caused its total assets to balloon to 1.2 trillion yuan ($184 billion). Amid a government crackdown on debt-driven spending, HNA has since 2017 shifted focus back to its core aviation business.

In one of Friday’s announcements (link in Chinese), HNA’s restructuring team said that would-be strategic investors will be required keep operations of the private conglomerate’s core airline business unchanged. Specifically, investors won’t be allowed to sell any of HNA’s airlines, such as Shanghai-listed Hainan Airlines Holding Co. Ltd. (600221.SH) whose stock has been slapped with “special treatment” status, meaning it is in danger of being delisted.

In 2019, HNA was planning to sell some of its regional airlines like Beijing Capital Airline Holding Co. Ltd. and Guangxi Beibu Gulf Airlines Co. Ltd., according to sources close to HNA.

However, the working team that the Hainan provincial government set up last year to defuse the conglomerate’s debt crisis later nixed the plan, which had been proposed by HNA’s co-founder, Chen Feng, as a way to raise cash, the sources told Caixin.

The working team wanted to preserve HNA’s status as China’s fourth-largest airlines group, while bringing in private companies as investors, people close to the team told Caixin. Without a privately owned company like HNA, an independent regional airline would likely end up getting acquired by one of China’s “Big Three” state-owned airlines, the people said.

In its announcement Friday, HNA’s restructuring team also said that prospective investors would be required to make sure that a restructured Hainan Airlines would focus on the commercial flight business, and in principle would not invest or otherwise engage in unrelated industries.

Would-be investors in HNA’s airport business would be restricted to state-controlled companies, according to a separate announcement (link in Chinese). HNA’s airport holdings include Sanya Phoenix International Airport, located in the island resort city of Sanya, South China’s Hainan province, as well as Bo’ao Airport near the town in Hainan that hosts the annual Boao Forum for Asia. Sanya Phoenix International is owned by HNA Infrastructure Investment Group Co. Ltd. (600515.SH), another HNA company whose shares are under special treatment status.

HNA’s retail business will be open to any kind of investor, according to the third announcement (link in Chinese). Its retail operations mainly consist of CCOOP Group Co. Ltd. (000564.SZ) — whose shares are also under special treatment status — which grew into a retail heavyweight only to end up being used like an ATM by HNA and its subsidiaries.

HNA’s creditors will hold their first meeting in the restructuring case on June 4, according to a statement (link in Chinese) released Monday by the Hainan High People’s Court.