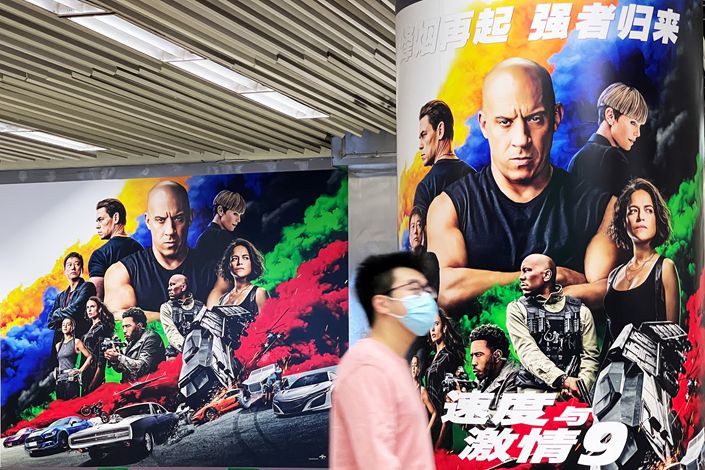 China’s weekly box office has topped 1 billion yuan ($156 million) outside a public holiday for the first time since January, boosted by ticket sales for the new installment of Hollywood’s “Fast and Furious” franchise.

In a promising sign of the nation’s post-pandemic rebound, China’s cinemas took 1.36 billion yuan in the week through May 23, a rise of 132% on the previous seven days, according to the China Movie Data Information Network.

Despite lukewarm reviews, “F9” raked in 876 million yuan, or nearly two-thirds of the total. The film, which stars Vin Diesel and is actually the 10th full-length release in the franchise, hit Chinese screens on May 21.

A string of new romance flicks beefed up revenues to levels not seen since the first month of the year, a period bookended by national holidays that typically brings a rise in consumption.

“F9” followed in the footsteps of its predecessors, many of which have also proved popular among Chinese moviegoers. The film, which was directed by Justin Lin and distributed by Universal Pictures, has a score of 5.5 out of 10 on ratings website Douban.

The franchise’s previous entry, “The Fate of the Furious,” took 1.35 billion yuan on the first weekend when it was released in China in April 2017.

Last week’s takings were bulked out by the 234 million yuan accrued on May 20, which saw several domestic releases timed to coincide with a date increasingly popular among couples because its shorthand form, “520,” sounds a bit like “I love you” in Mandarin.

Most of that day’s new pictures had strong romantic themes. “Love Will Tear Us Apart,” a film about a relationship under stress, took one-third of the national one-day box office earnings of 234 million yuan.