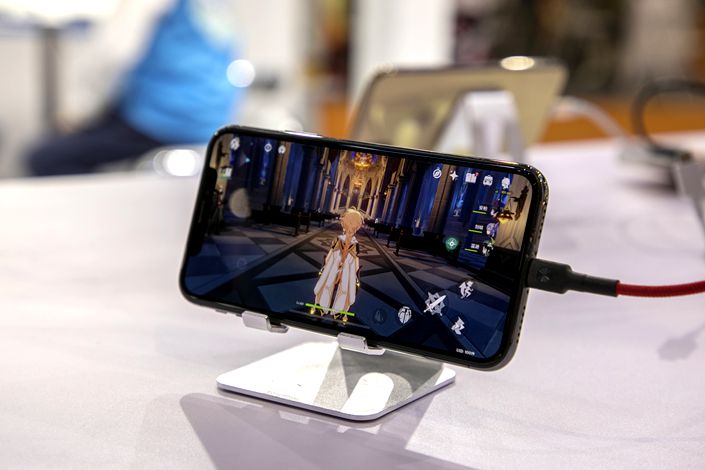 A miHoYo-developed video game gets displayed on Nov. 19 at an industry event in Shanghai. Photo: VCG

A new generation of online game developers is bringing a major shakeup to the industry in China and threatening the long-established dominance of titans like Tencent Holdings Ltd. and NetEase Inc.

One of the brightest rising stars is Shanghai-based miHoYo, developer of the popular fantasy game Genshin Impact. Launched in September 2019, the free-to-play open-world adventure has scored success both inside and outside of China. Available on mobile devices, PlayStation 4 and the PC in more than 50 countries and regions, the game generated $1 billion of sales in Apple’s App Store and the Google Play store in less than six months. Tencent’s most popular game, Honor of Kings, took 18 months to reach that milestone.

In 2020, 10-year-old miHoYo ranked ninth among Chinese game developers in term of foreign revenue. The company has maintained a steady pace of releasing a new game every two to three years, and most have performed well.

Other upstarts include FunPlus, Yotta Games and IGG, along with Lilith Games, which once rose to China’s second-largest game developer in term of overseas sales behind Tencent.

Unlike deep-pocket industry leaders that can invest heavily in popular titles, the new players mostly rely on in-house development and win market share with top graphics and content quality, analysts said. Most of the companies have rejected investment proposals from Tencent to maintain their independence, Caixin has learned.

Popular anime and comics are the main source of inspiration of new players like miHoYo and Lilith, which has helped them win young players.

“Over the past year, the gaming industry is changing as players’ appetites for anime and comics-based content are growing,” said one person close to Lilith.

“Their success is breaking the industry myth that only big companies can produce good products,” Wu said.

Tencent has felt the threat. After its proposal to buy a stake in miHoYo failed last year, the tech giant sped up investments in game developers to fend off challenges from the emerging rivals.

China’s gaming industry is a heated battlefield. In 2020, the country’s mobile game users totaled 654 million, up 4.5% from the previous year. But compared with markets like the U.S. and Japan, Chinese mobile users spend much less on the games they play, suggesting huge growth potential, experts said. Tech giants such as ByteDance Ltd., owner of popular short-video app TikTok, have also increased their bets on the gaming industry for future growth.

Despite the success stories, most Chinese game developers are still struggling to sustain profitability with steady releases of high-quality titles. Meanwhile, regulatory uncertainties and toughening oversight are major challenges for the industry.

MiHoYo was founded in 2011 by three Shanghai Jiaotong University schoolmates who shared an obsession with Japanese anime culture. In 2012, the company received a 1 million yuan ($155,680) investment from game publisher Sky-mobi Ltd. and launched its first mobile game Zombiegal Kawaii.

According to the initial prospectus, miHoYo’s revenue topped 588 million yuan in the first half of 2017 with net profits of 447 million yuan. The high profit margin reflected the company’s small spending on marketing and outperformed most in the industry.

But miHoYo suspended its listing plan in September 2020, though it soon released the game Genshin Impact, the biggest global launch yet for a Chinese game. According to CEO Cai Haoyu, miHoYo’s 2020 revenue reached 5 billion yuan, up elevenfold from four years ago.

“Before Genshin Impact, most developers would spend $5 million or less in game development and much more for marketing. But more than $100 million was spent on Genshin Impact’s development,” said Zhao Yinjiang, a senior manager of Google Play’s China operation.

Unlike most developers that rely heavily on major distributors to market their games, miHoYo sold the product through its website and a handful of third-party platforms.

Zhao compared miHoYo’s business model with that of U.S. entertainment giant Marvel Entertainment LLC and said miHoYo has focused on creating titles for a global audience to secure sustainable profit with little reliance on marketing.

Rival Lilith holds a similar global vision. Established in 2013 by a former Tencent executive, the company has developed popular titles including Art of Conquest, Rise of Kingdoms and AFK Arena that topped the download rankings in several foreign app stores. In the second quarter of 2019, Lilith’s revenue ranked third among Chinese game developers after Tencent and NetEase, according to data provider Sensor Tower.

While new players are on the rise, industry leader Tencent has stepped up investment in content developers. During the first quarter this year, Tencent initiated 103 investments, including 31 deals in the gaming industry, according to industry data provider qcc.com.

Tencent is feeling the pressure of losing users as its popular titles Honor of Kings and PUBG Mobile have been in operation for more than three years without the release of any new hits, an industry expert said.

Although Tencent has the greatest resources in the gaming industry in terms of users, products and platform, the innovation-driven industry is changing fast and can hardly be dominated by one player for a long time, experts said.

Developers are building up their content development capacity as it will also give companies more bargaining chips in distribution and marketing, said Huang Yimeng, CEO of game developer XD Inc.

Tightening regulation of new games in recent years has reduced the number of new titles but also made high-quality products more hotly pursued by platforms, an industry source said.

Facing stricter domestic oversight, developers are making new forays abroad. According to an industry report, sales of China’s domestically developed games have been rising since 2018 after declining over the previous three years. In 2020, sales of China-made online games rose 33% from the previous year to $15.5 billion, of which 60% came from Japan, South Korea and the U.S. The market share of Chinese games reached 22% in foreign market in 2020, according to data analytics firm AppAnnie.