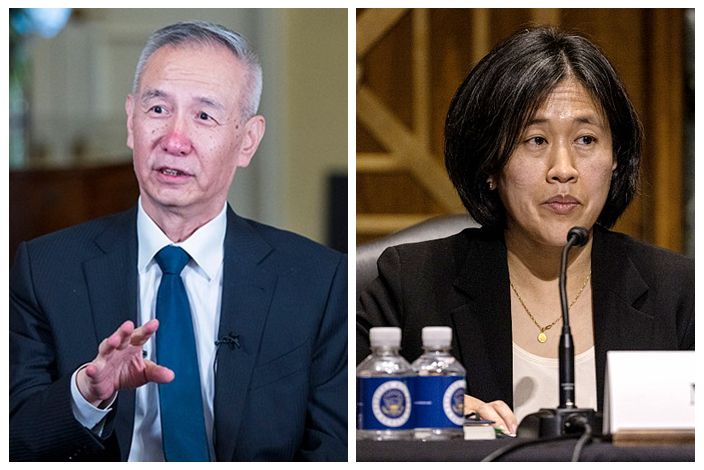 “In a spirit of mutual equality and mutual respect, the two sides conducted candid, pragmatic and constructive exchanges,” the ministry said in a statement. “The two sides agreed that the development of bilateral trade is very important.”

The two countries’ lead trade negotiators “exchanged views on issues of mutual interest and agreed to maintain communications,” the statement said, without elaborating.

Regarding the conversation, the U.S. Trade Representative Office (USTR) said in a statement that Tai “discussed the guiding principles of the Biden-Harris Administration’s worker-centered trade policy and her ongoing review of the U.S.-China trade relationship.”

The phone conversation came two months after China and the U.S. concluded their first high-level face-to-face meeting in March in Anchorage, Alaska, as an effort to reengage after their relationship deteriorated during the previous four years under former U.S. President Donald Trump.

However, in Anchorage, the two sides identified limited areas of cooperation and coordination such as climate change, while acknowledging “significant,” or “fundamental” disagreements regarding Hong Kong, Xinjiang, Tibet and Taiwan.

While in economic and trade areas, China has repeated urged the U.S. to roll back Trump era policies including punitive tariffs imposed on Chinese products during the tit-for-tat tariff war from 2018 to early 2020.

Beijing reached a phase one trade agreement with Washington in January last year, agreeing to purchase billions of dollars of U.S. products. With the new U.S. government in office, there has been speculation that the two sides might renegotiate the phase one deal.

However, the U.S.’ top trade negotiator has repeatedly said that China needs to deliver on the promises made under the trade deal reached under Trump.

“I’m very much looking forward to formally engaging my Chinese counterparts, in assessing their performance and hearing what they have to say,” she said during the hearing.

When asked about China’s accelerating purchase of U.S. corn in early May, Commerce Ministry spokesperson Gao Feng told reporters Thursday that the two sides should work together to create a favorable environment for the implementation of the phase one agreement.

According to U.S. Agricultural Department data, China ordered about 9.5 million tons of U.S. corn from May 7 to May 11, more than one-third of next season’s expected corn imports.