Li Auto Admits Its Self-Driving Tech Is Sub-Par, and Its Stock Jumps 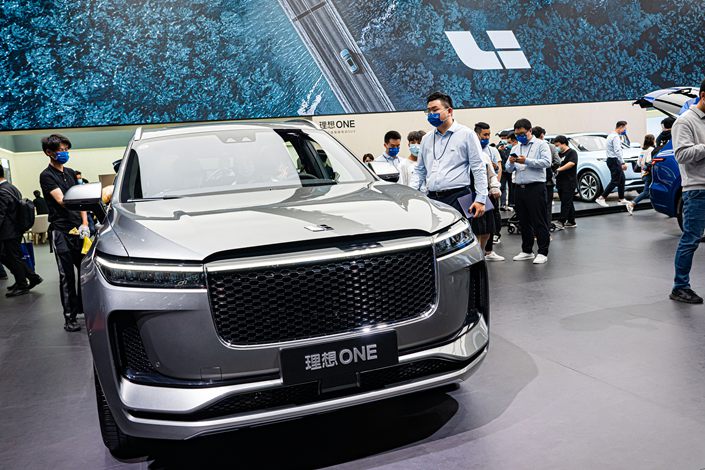 Li Auto's deliveries in the first quarter were 12,579 units, down 13 percent from the previous quarter. Photo: VCG

The share price of Li Auto Inc. (NASDAQ: LI) soared on Wednesday despite the Chinese electric vehicle (EV) upstart announcing a slide back into loss and admitting its self-driving technology is not as good as its competitors’ products.

The strong one-day rise indicates that investors still see potential in the Nasdaq-listed automaker, which beat expectations but still posted a net loss of 360 million yuan ($56 million) for the first three months, reversing the 107.5 million yuan net profit it booked in the prior quarter and widening its 77.1 million yuan loss from the equivalent period last year.

Revenue was 3.58 billion yuan, more than treble its takings in the pandemic-hit first quarter of last year, according to the company’s unaudited earnings report published before the start of Wednesday trading.

Li Auto’s shares closed up 14.16% at $22.82 on Wednesday. Alongside China’s other two major U.S.-listed EV-makers, Nio Inc. and Xpeng Inc., the company has seen its stock price fall dramatically so far this year due in part to a production slowdown caused by a global semiconductor shortage.

Compared with the previous quarter, Li Auto’s sales fell by 13% to 12,579 vehicles, with the company attributing the decline to the impact of the Covid-19 pandemic and China’s Lunar New Year national holiday.

The Meituan-backed firm said it expects to deliver between 14,500 and 15,000 vehicles in the three months through June. It currently only produces the plug-in hybrid Li One SUV, though it plans to release another SUV next year and a pure-electric model in 2023.

Like its EV rivals, Li Auto struggles to turn a profit from vehicle sales. Chief Financial Officer Li Tie said during a February earnings call that the company’s net gains were mainly earned through returns on investments in short-term financial products.

Other Chinese carmakers have sought extra income through selling proprietary autonomous driving technology. But Li Auto is bearish on that option, with co-founder Shen Ya’nan saying Wednesday that the firm needs to “do more homework” to bring its offerings to the same standard as domestic peer Nio Inc. and global EV leader Tesla Inc.

Despite recent upticks brought on by heartening earnings results, the stock prices of both Nio and fellow hometown player Xpeng have respectively plunged by around one-quarter and one-third this year thanks partly to the disruption in global chip supplies. Li Auto’s shares are also down by around one-third over the same period.