Weekend Long Read: How to Break the Deadlock Over China’s Local Debt 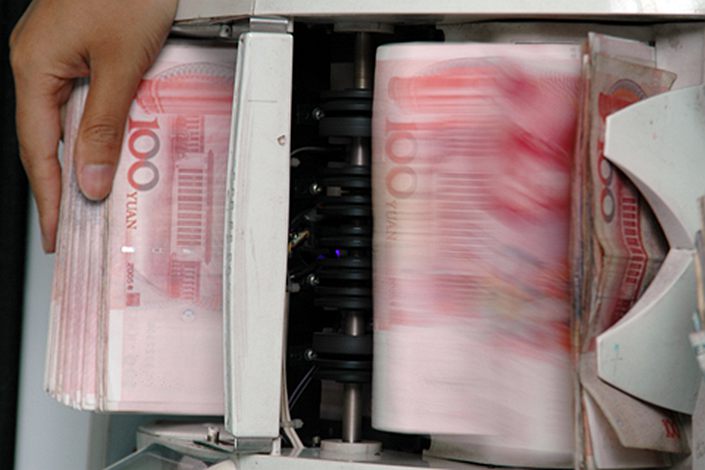 Local government debts have always been a key concern for anyone watching China’s economy, though one could be fogiven for being confused about contradicting messages coming from Beijing and local governments.

If we take a look at the recent stream of news about implicit local government debts, we will see the central government is putting out the harshest regulations against any kind of implicit guarantee, while local governments are doing the exact opposite — trying their utmost to ensure the debts get repaid. In other words, one says let it default when it should, and the other is saying we will do everything we can to avoid a default.

On April 13, the State Council, China’s cabinet, issued a document explicitly stating that “preventing and defusing the implicit debt risks of local governments should be regarded as an important political discipline and rule. ...” Moreover, the State Council is also requiring a sound market-oriented and law-based disposal mechanism for debt defaults.

The message comes from the party too. On April 30, the Political Bureau of the Communist Party of China Central Committee stated in a press release that “we will prevent and eliminate economic and financial risks and establish a risk disposal mechanism under the responsibility of major local party and government leaders.”

However, when the director of the Financial Work Office of the Hohhot city government was interviewed by the official People’s Daily on May 7, he promised to “ensure that the matured bonds of Chunhua Water Group are redeemed on schedule.” Such quotes from local government officials have been commonplace.

What do we see here? On the one hand, the central government is hoping to use the rare economic “window” in the post-Covid shock to eliminate implicit local government debt risks, establish a market-oriented and law-based debt default disposal mechanism, so that they can avert systematic financial risks. On the other hand, some local governments are striving to meet rigid payment demands, and ensure they stay out of the headlines.

Indeed the central government launched a campaign to crack down on “evasion of financial obligations” — local governments writing off debts that they should pay back. But that obligation does not equate to “avoidance of any bond defaults,” meaning doing everything to save a company from bankruptcy, and extend the implicit guarantee.

So, how to break the deadlock? What kinds of risks are allowable? These problems have not only disoriented government sectors; they have affected everyone in the financial markets.

The “law-based debt default disposal mechanism” emphasized by the central government requires abidance by the principle of “one debt, one vote.”

Fruitless as the central government’s permission is to “bankrupt urban construction investment companies,” the mechanism still finds no ground for this.

The fundamental reason is that local governments are deterred from being seen as the pioneer for bankruptcy reorganization because of their own interests. It is might be possible to create such a debt disposal mechanism, but only if there is a sufficient number of corresponding cases — the more cases, the more complete the mechanism will be. At the same time, with more cases, investors will be better able to predict the loss ratio after default, which will assure the pricing function of the market. Despite the good intentions behind the mechanism, local governments, as the actual executors, are hardly inclined to act on the issue, as it is both risky and unprofitable.

It is impossible to dispose of risks without taking on risks. If we are too afraid of systemic risks, we are likely to miss our best chance to fix the problem.

We say that the market is fair precisely because any profitable investment is accompanied by risks. Profits are never a guarantee. Although the “market-oriented and law-based debt default disposal mechanism” doesn’t come close to satisfying everyone, the shock of its implementation is bound to be short-lived, since the mechanism itself will achieve a new balance through survival of the fittest. Large-scale losses in the financial market are nothing new. However, anticipated market events will not ferment systematic shocks. Yongcheng Coal and Electricity Holding Group Co. Ltd. failure to repay its bonds had such a huge impact on the market because it was outside the expectations of most market institutions. Considering the development of implicit debt issue thus far, market-oriented debt reorganization is widely expected to happen eventually — but the longer the delay, the less effective it will be at resolving the issue, and the greater its impact will be on the market.

Set boundaries to break the deadlock

Debt default disposal in its current state has the best internal and external conditions — adequate market expectation, an economically favorable time window and an unprecedentedly stable public opinion environment — factors that will become rarer in the future. It’s thus now or never for debt disposal.

The key to breaking the deadlock now is to developing both solutions and incentive systems. Solutions clarify how much the government should pay, while incentive systems clarify the responsibilities they should shoulder.

Disposing of existing implicit debts will require the boundary between government debt and operating debt to be clarified. Local governments can pay project arrears to the agent construction companies according to the cost of the completed projects, but the borrowing interest rate should not be higher than the local debt interest rate for the same period. All other debts are the operational debts of urban construction investment companies, which have nothing to do with local governments. In the meantime, the status and cost details of agent construction projects should be released to the public within a limited timeframe and subject to social and audit supervision.

Once the boundaries of government debt are delineated, the outstanding debt balance is locked in and the cost of capital is controlled. Creditors’ investment income is linked to the operation of urban construction investment companies — while investors are not affected by said companies’ strong profitability, they can only accept a very low discount rate for poorly operated companies.

Since local governments lack motivation to “break the deadlock,” some compromises need to be made when developing the incentive systems, not only to protect but also to reward local governments that brave enough to explore the “risk disposal mechanism.” Once outstanding implicit debts accumulated over the past decade or so have been repaid, the market-oriented and law-based risk disposal mechanism has been established and the market mechanism has been improved, the benefits they bring to fiscal and financial departments will be permanent.

Although the implicit debts were not caused by incumbent local officials, they are liable for repayment. How to motivate pioneers and strike a balance between “disposing of implicit debts” and “shouldering responsibilities”? That is really the key to breaking the deadlock.

History as a mirror

Throughout most of its history, China’s economy could outperform the rest of the world’s, thanks especially to its monopoly on luxury goods such as tea, silk and porcelain. At that time, when Chinese merchants engaged in the world market, they found few commodities worth importing into China, save a few luxuries like fur and leather, clocks and watches. Tools for colonizing the world were completely out of mind. This glorious era ended after the reign of Emperor Qianlong (1735-1796). Over the next two centuries, China clung to the brink of collapse and suffered unprecedented invasion and humiliation. As efforts were made to rejuvenate the country, men of insight never stopped pondering what caused China’s decline 200 years ago.

After researching the business model of the Qianlong period, some scholars concluded that “the improper intervention of public power caused the commercial contract system of the Qing Dynasty to exist in name only.”

How, less than 100 years after the glory of the Qianlong period, did China degenerate into a dumping ground for Western commodities — despite its wide talent pool, existing technologies and ample business opportunities? One reason is a business model that lacks a contract system.

Take commercial loans as an example. In China, a destination market for global silver (the hard currency in the era of metal money), the domestic borrowing rate was actually four to seven times that of the U.K. during the same period. The contract system was the fundamental reason. If a Chinese businessman owed money to a foreign businessman, the Chinese government would urge the Chinese businessman to repay the money, but if the debtor and the creditor roles were to be switched, the Chinese government would sit on his hands.

Looking back 200 years, we can see that the biggest cost of commercial loans came from the absence of a contract system, and high interest rates were an inevitable result of the Qianlong business environment. If we hope to control borrowing costs, we need to look beyond interest rates and recognize that it is the system of contract, as well as the spirit of contract, that truly determine interest rates.

Today the contradiction between the national budget law and reality, along with the ambiguous relationship between the urban construction investment companies and local governments, is the reason underlying implicit debts’ high interest rates. In the absence of an explicit and mature contract mechanism, market interest rates will not fall and the lending system will not work efficiently.

After 200 years of pain, China is again returning to the center of the world arena as an economic powerhouse. If we continue to allow political correctness to manipulate the issue of debt and hamper the system and spirit of contract in the market, we will only be able to look back with regret.

Zhuo Yi is a senior professional in finance with years of experience in trust and insurance industries.