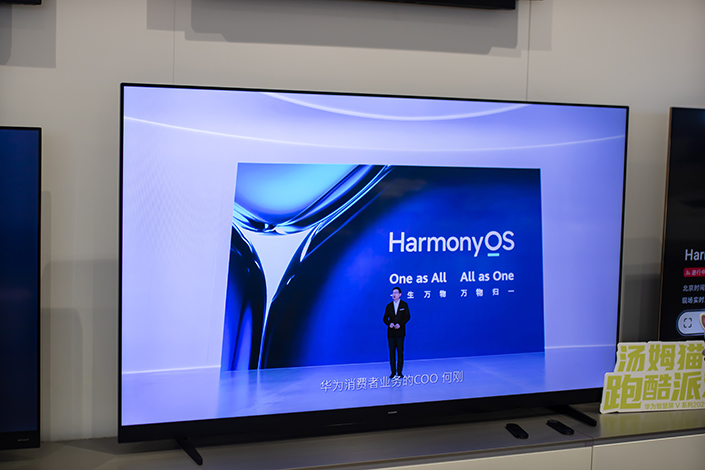 Since HarmonyOS was launched in 2019 as a countermeasure to U.S. sanctions, domestic software and hardware manufacturers have been reluctant to rely on a system controlled by Huawei. Photo: VCG

Huawei Technologies Co. Ltd. has released its home-grown HarmonyOS to open-source developers, seeking to develop it further as a substitute for running everything from smartphones to TVs to embedded Internet of Things devices.

China’s former leading smartphone-maker, still the world’s largest maker of telecommunications gear, aims to make the HarmonyOS operating platform a more full-featured alternative to Google-controlled Android operating system after a 2019 U.S. ban prevented it from using many of the most important services on the system in Huawei phones.

Huawei has handed control of the code in its HarmonyOS to a non-profit organization to encourage a community of outside software developers to freely use, improve and redistribute the underlying source code for their own products.

Under U.S. sanctions, Huawei, once the world’s No. 2 smartphone-maker, has seen its global market share crumble to 4% in the first quarter of this year from a recent peak of 20% in the second quarter of 2020, according to shipment data from market research firm Counterpoint.

Huawei has donated all the foundation framework of HarmoneyOS to the OpenAtom Foundation in 2020 and 2021 and participated in an open source project called OpenHarmony, according to an executive email (link in Chinese) sent to all staff on Friday. The email said OpenHarmony 2.0 has 245 contributors so far and Huawei will continue to contribute its own open source contributions to the project.

The Open Harmony project is managed by a working committee with seven members from six companies including Huawei, JD.com Inc., Shanghai Pateo Electronic Equipment Manufacturing Co. Ltd., and a state-backed research institute, the Chinese Academy of Sciences’ Institute of Software,. Major decisions related to the project are made by the members based on one-member-one-vote principle, a Saturday statement (link in Chinese) released by the foundation said.

Since HarmonyOS was launched in 2019 as a countermeasure to U.S. sanctions, domestic software and hardware manufacturers have been reluctant to rely on a system controlled by Huawei, making it both referee and athlete in a competitive sense, analysts at consultancy Wuhan Bolan Financial Information wrote in a note on Monday.

“Huawei’s refusal to be the referee would ease the concerns of many enterprises at home and abroad and clear the way for the system to expand its domestic application,” they wrote.

Huawei has set a target to incorporate the HarmonyOS into 300 million devices this year, with one third of the goal coming from 100 million devices produced by other companies. Last week, it unveiled its first devices using the operating system, including a tablet PC and smartwatch, and it has allowed some existing phones and tablet PC models to shift their system to HarmonyOS 2.0.

HarmonyOS can be adapted for use in a wide range of connected devices beyond just smartphones, including home appliances, cars and even drones.

The strategy is unlikely to challenge the dominance of closed source Apple iOS software or open source Google Android, analysts at brokerage HuaAn Securities Co. Ltd. said. It is not easy for more than 2 billion smartphone users based on Android to switch, so Huawei is targeting incremental gains from new and future devices like smart appliances and smart cockpits, they wrote in a research note.