By Shen Xinyue and Matthew Walsh 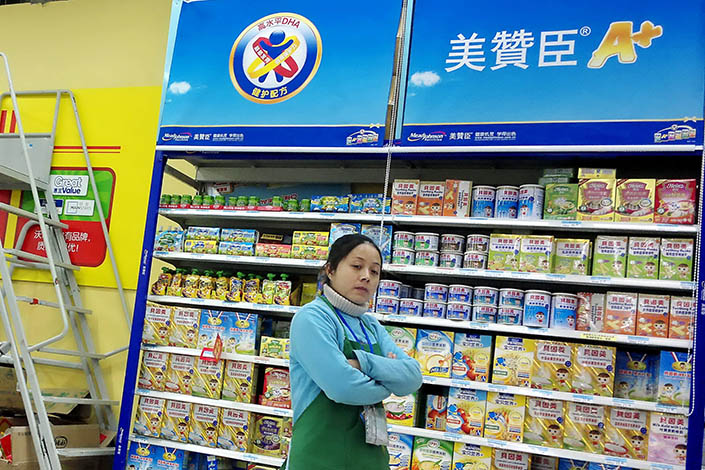 Reckitt Benckiser Group PLC has agreed to sell its infant formula subsidiary in China to private equity firm Primavera Capital Group for $2.2 billion, retreating from a business that has dragged down its growth for several years.

Primavera will acquire the Greater China division of Mead Johnson Nutrition Co., a U.S.-headquartered subsidiary of Reckitt that makes child nutrition products including its flagship infant formula Enfamil, according to a pair of Saturday press releases.

Reckitt will retain an 8% shareholding in the unit and expects net cash proceeds of about $1.3 billion, the company said.

The British consumer-goods giant announced in February that it had launched a strategic review of its infant formula and child nutrition business in China, saying it was struggling due to restrictions on cross-border trade between Hong Kong and the mainland, as well as rising competition from domestic challengers.

The unit has also come under pressure from falling birth rates, Reckitt said at the time. Like many countries, China recorded a dramatic decline in the number of new births last year, when its Covid-19 outbreak was at its height. The country also faces a long-term demographic crisis driven by persistently low birth rates.

Mead Johnson’s share of the infant formula market in China shrunk to 5.1% last year from 6.7% in 2016, according to Euromonitor, a consulting group. Reckitt’s global nutrition business saw revenue fall by 2% last year and lagged behind the company’s health and sanitation segments.

Lei Yongjun, a dairy industry expert, told Caixin that Mead Johnson had struggled to fend off domestic rivals at the lower end of the Chinese market like China Feihe Ltd. and Junlebao Dairy Co., and had so far failed to outcompete well-known international brands like Wyeth Nutrition and Danone SA in the country’s richer, more-developed cities.

Chinese consumers have regained some trust in homegrown infant formula brands since the 2008 Sanlu scandal in which six babies died and more than 50,000 were hospitalized after drinking tainted locally-made milk and formula. The products had been deliberately contaminated with the chemical melamine in order to boost their apparent protein content.

The deal between Reckitt and Primavera will see the latter firm take over manufacturing facilities in the Netherlands and the southern Chinese city of Guangzhou, and obtain a royalty-free perpetual and exclusive license for the Mead Johnson and Enfa family of brands in China.

After the transaction goes through, Reckitt will continue to own the Mead Johnson and Enfa brands globally and will operate them in the rest of the world. Reckitt Benckiser acquired Mead Johnson in 2017 for $16.6 billion.

Reckitt CEO Laxman Narasimhan said the deal would deliver “better and more consistent growth and margin profile” for the group’s nutrition business, adding that the firm remained committed to China, which is the largest global market for its Durex brand and a major market for its Dettol, Finish and VMS household product lines.

Fred Hu, Primavera’s founder and chairman, said the group was “pleased to acquire the Greater China business of Mead Johnson, a long-established and renowned multinational infant and children nutrition brand.

“We look forward to collaborating with Reckitt management and to continuing to provide customers the highest-quality nutritional products through world-class scientific innovation and R&D capabilities, as well as the strictest safety and quality control,” he added.