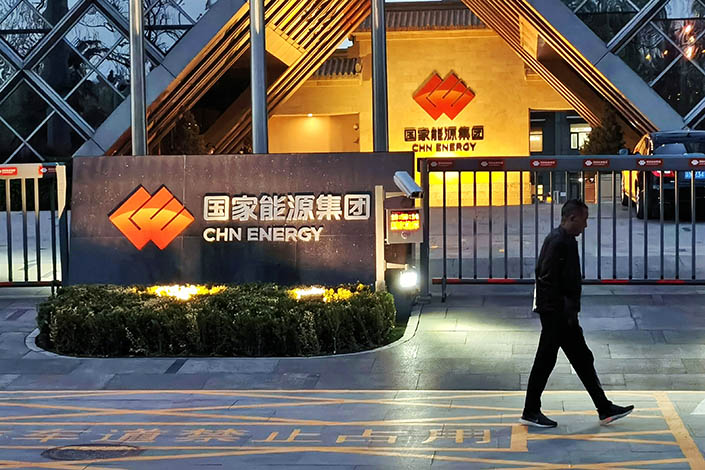 A man walks outside the office building of National Energy Group in Beijing on March 30, 2021. Photo: VCG

Power major China Energy Investment Corp. plans to install 15 gigawatts in new solar and wind capacity this year, nearly triple its total from 2020, as the nation races to wean itself from fossil fuel-fired power ahead of China’s pledge to go carbon neutral by 2060.

The aggressive new target, unveiled on Saturday at a coal industry event by Gu Dajian, executive vice director of China Energy’s science and technology commission, compares with 5.22 gigawatts of solar and wind power installed by the power giant last year.

China Energy’s aggressive installations come as China is racing to achieve its previously stated goals of achieving peak carbon emissions by 2030, and going carbon neutral by 2060. Unlike the West where power plants are built, owned and operated by private companies that focus on investment returns, most of those functions are conducted by big state-owned entities in China. Accordingly, such entities often balance government priorities with commercial factors.

But commercial viability is becoming less of an issue for such renewable sources as the technology behind them improves, eliminating the need for government support to make them competitive with traditional fossil fuel-powered energy.

China Energy is one of the nation’s biggest users of green energy, with total wind power capacity of about 46 megawatts — or 16.3% of all wind power capacity in China. But due to China Energy’s concurrent, relatively large use of traditional fossil fuel-generated power, renewables only accounted for just over a quarter of its overall capacity at the end of last year.

By comparison, the nation’s other major power generators are investing more heavily in renewables as a percentage of their overall capacity. Renewable power sources now account for more than half the installed capacity of State Power Investment Corp. Ltd., the most aggressive generator in terms of renewables.

China Energy’s plans to add 15 gigawatts of solar and wind capacity this year are part of its bigger plan to install between 70 gigawatts and 80 gigawatts of new renewable energy capacity during China’s latest Five-Year Plan, which runs from this year through 2025.

An industry analyst told Caixin that China’s five major power producers have all drafted targets for new installation and use of renewable energy sources for the current Five-Year Plan. Such occurrence is common in China, with the central government typically disclosing a national plan first and then major state-owned entities following with their own supporting plans.

Besides achieving Beijing’s policy goals, renewable energy sources could also help to shield power producers from big swings in the price of coal. Such swings have been particularly pronounced recently, boosting profits for power producers when coal prices are low but creating losses when the opposite occurs.

Coal prices in China went on a roller coaster ride last year, with a major trough at the start of the year as the Covid-19 pandemic brought economic activity in the first quarter to a near standstill. But a colder-than-usual winter and lower coal imports in the second half of the year sent the price soaring.