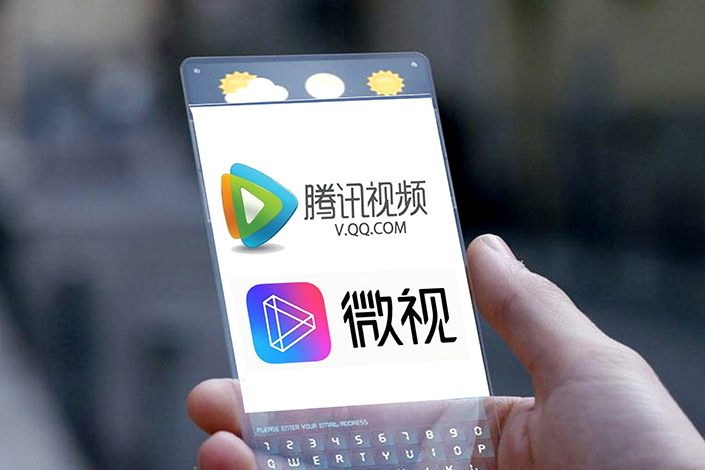 Tencent’s plan to reposition Weishi comes as the short-video app has fallen behind rivals Douyin and Kuaishou. Photo: VCG

Tencent Holdings Ltd. said it will reposition its Weishi app to focus on film and TV content, as the short-video platform struggles to win users in an increasingly saturated domestic market dominated by Douyin and Kuaishou.

Weishi will pivot away from sharing user-uploaded videos and instead offer TV and movie clips, help to distribute Tencent’s licensed content, and build a system to redistribute works by other creators, Sun Zhonghuai, the technology giant’s vice president, said Monday at a press conference in Shanghai.

The announcement comes after the Hong Kong-listed firm integrated Weishi and several other platform and content offerings into a new online video business unit headed by Sun, in an effort to enhance profitability and quality.

Sun lambasted China’s short-video culture at an industry forum last week, calling the clips “increasingly low-intellect and vulgar” and comparing them to “pig feed.” People who watched the videos were “like idiots,” he said, adding that the ways such apps use algorithms to recommend similar clips to viewers was a style of “brainwashing” that was coming under pressure from industry regulators and auditors.

Tencent’s internal shake-up is taking place as investors grow increasingly jittery over potential government clampdowns in China’s technology sector. Tencent, which also operates the messaging app WeChat, has seen its share price drop by more than 20% since hitting a record high in February.

Weishi has struggled to carve out a space in China’s huge short-video market amid pressure from ByteDance Ltd.’s Douyin — known as TikTok outside the country — and Kuaishou Technology’s eponymous app.

According to Quest Mobile, a Chinese research firm focusing on mobile technology, Weishi had fewer than 100 million monthly active users (MAUs) at the end of the first quarter. By comparison, industry leader Douyin said last year it had around 600 million MAUs, and Kuaishou has 520 million, according to its most recent earnings report.

Speaking at an event to mark the 10th anniversary of Tencent Video, Sun said the formation of the company’s online video unit was based on managerial-level considerations around resource allocation and changes in user behavior.

“In the last two years, it’s been difficult to please users with all the long videos or all the short videos in a single app,” he said, adding that users increasingly expect to be able to see their favorite content on one platform.

“In terms of TV and film works, they not only want to be able to watch features, but also want to see extra content derived from those series and to participate in deep discussions and communications with other fans,” Sun said.

Sun is the unit’s CEO, while Lin Songtao is its chairman. Both report to Ren Yuxin, Tencent’s chief operating officer and the chief of its platform and content group, as well as its interactive entertainment group.

Since April, Tencent and other Chinese streaming giants like Youku Tudou Inc. and iQiyi Inc. have committed to tackling piracy on the country’s short-video platforms, which have come under fire for hosting users that illegally clip or broadcast copyrighted material.

Online platforms that host longer videos typically struggle to guarantee long-term returns on investment and high-quality content. Tencent Video made a loss of around 3 billion yuan ($470 million) in 2019, according to the company’s financial reports. Rival iQiyi lost 10.3 billion yuan that year.