Juneyao Links Up With Trip.com While Eyeing HNA Assets 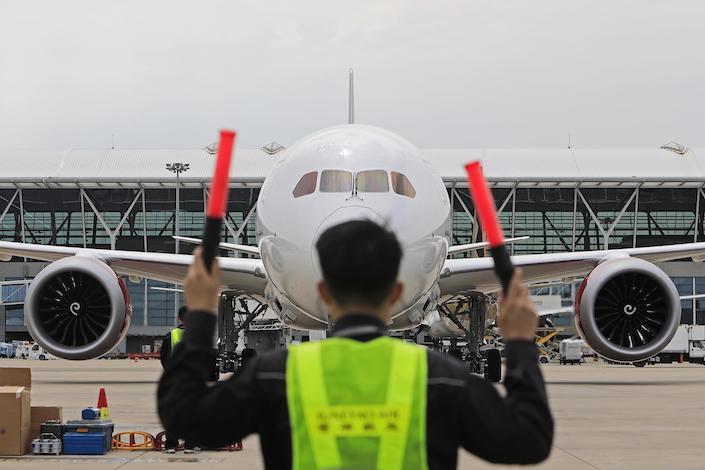 Under the partnership, Juneyao and Trip.com will cooperate in business development, strategic investment and digital innovation, among other areas, the companies said Tuesday. The companies are focusing on partnership in aviation and tourism services and may consider deeper cooperation in the future, a Juneyao source said.

Now Juneyao is looking for partners to bid for airline assets from HNA, which is in bankruptcy restructuring. Juneyao in late April said it plans to join with strategic investors to set up a 30 billion yuan ($4.6 billion) partnership for investing in airline operators. Sources told Caixin that the partnership was eyeing HNA assets.

Juneyao planned to invest 5 billion yuan in the partnership, and its shareholder Shanghai Juneyao Aviation Investment Co. Ltd. and other strategic investors are to commit as much as 24.95 billion yuan, according to Juneyao’s April statement.

In May, Shanghai-listed asset manager Shanghai AJ Group Co. Ltd. (600643.SH) said it would invest as much as 4 billion yuan in the partnership with Juneyao.

HNA is seeking strategic investors for its airline, airport and retail businesses as part of its bankruptcy restructuring. In March a court in Hainan approved including the giant conglomerate and 320 related companies in a single bankruptcy reorganization.

HNA’s flagship carrier Hainan Airlines had a market value of 28.9 billion yuan as of Wednesday. The company faces debt claims amounting to 295.9 billion yuan, according to a creditors’ register. In 2020, Hainan Airlines reported a net loss of 64 billion yuan. Its stock has been slapped with a “special treatment” label, meaning it is in danger of being delisted.

Shanghai Yuyuan Tourist Mart Group Co. Ltd. (600655.SH), a retail unit of conglomerate Fosun International Ltd., said in May that it plans to set up a 40 billion yuan joint venture with affiliates and strategic investors to buy into airline companies. A source close to Fosun told Caixin that the new venture aims to bid for HNA’s airline assets.